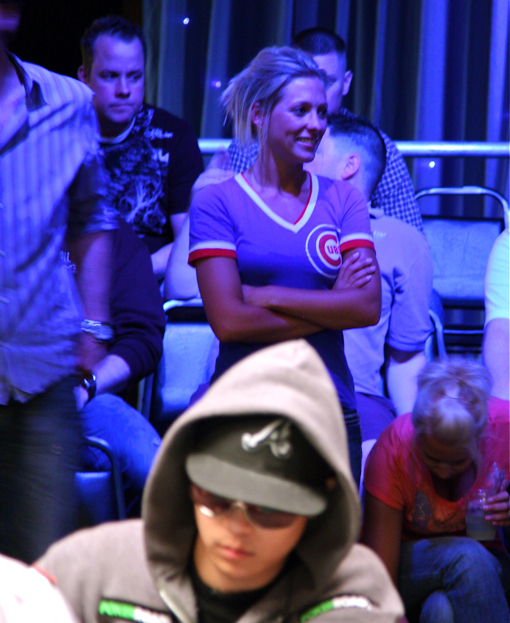 When Steve Sung won his last bracelet in 2009, this is what Girls on the Rail looked like.

This week is a lot of fun. How fun? We asked Merch for a quote:

This week is like the Maple Tree Jubilee in Gallatin, Tennessee. It’s a rompin stompin good time from dawn till the wee hours of the A.M., but I’m tellin ya, watch out for oooolld man Jenkins! He’s a prickly one!

So yeah, the 2013 WSOP really heats up. Players Championship. All the foreigners come in for the pre-ME donkaments. Then the Main Event. Great week. Here’s the latest.

:: Event #52 ($25,000 NLH Six-Handed) – Stacked final table. All eyes were on if online legend Phil ‘OMGClayAiken’ Galfond could win his second bracelet. Not all eyes were on if Steve Sung could win his. Based on that set-up, guess who won. Steve Sung bested Phil Galfond to win his second bracelet and $1,205,324. Sung last won a WSOP event in 2009 when he outlasted over 6,000 players in the inaugural $1k “stimulus” event. Gave us the above GOTR shot. Another Sung-added bonus, he’s part of the spectacularly-breasted JC Tran’s crew, giving us a long over-due spectacularly-breasted JC Tran sighting. Galfond earned $744,841 for second. Dani Stern took $509,473 for third. Get full results here.

:: Event #55 ($50,000 Players Championship) – So far, 120 have registered. Not mind-blowing, but coming off the BigOne buy-in, the 120 is on par with previous years. A total of 113 survived to Day 2. Jonathan Duhamel (Duhamel) is the chip leader. He’s followed by Jason Mercier. Get full chip counts here.

And yes, watch out for old man Jenkins. He’s a prickly one.