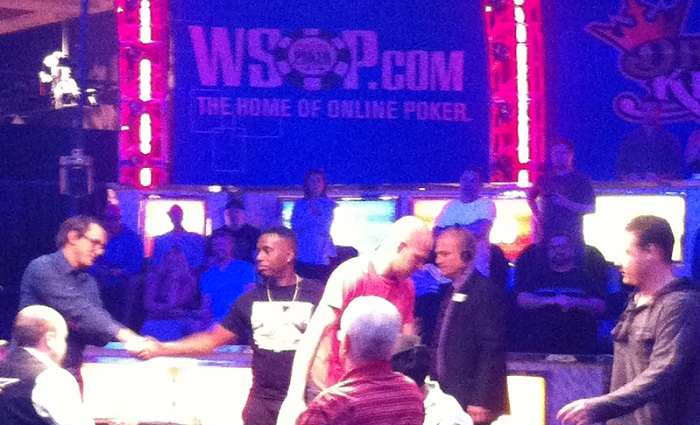 Maurice Hawkins made a too-soon exit from the Millionaire Maker final table.

We commented on Twitter recently how the WSOP Millionaire Maker had the feel of Main Events from around 2005-06. There was a lot of buzz, excitement, energy…and amateurs.

While many pros still contend that the Main Event has plenty of dead money, it’s definitely no longer like the prime boom years. With all of the training tools and ability to play so many hands online, everyone got good. Except the French. They keep overplaying A-3.

As evidenced by its massive field and amateur-feeling final table, the Millionaire Maker struck a nerve, giving the Average Joe an opportunity to bank a WSOP fortune. This is good for poker.

Andrew Dick came in eighth ($164,118), going limp to an early final table exit. The potential star of the final table was Circuit grinder Maurice Hawkins ($128,150), a mix of Daniel Negreanu chattiness and Dwyte Pilgrim cockiness. Alas, like Dick, he petered out too soon.

:: Event #13 ($10,000 2-7 No Limit) – A total of 87 entered with 36 surviving. This is a stacked field. Jennifer Harman is the overnight chip leader. Daniel Negreanu, Phil Hellmuth, Jean-Robert Bellande, Jason Mercier, and John Juanda remain, among many others. Get full chip counts here.

Wednesday kicks off with Event #14 ($1,500 Limit Omaha 8oB) which feels like it’s got The Intense Stare of Scott Clement’s name written all over it. Or at least we hope so, for our ESPN fantasy pool prospects.

* True story, we recently got an introductory email pitching a poker business from someone who had “69” in his email handle. Let’s call him johnsmith69 for the purposes of this story. Just a lesson to future johnsmith69’s reading this post–if you want to be taken seriously–in business, with girls, or as an adult–don’t be that guy who puts 69 in his email handle. You’ll immediately be discredited.