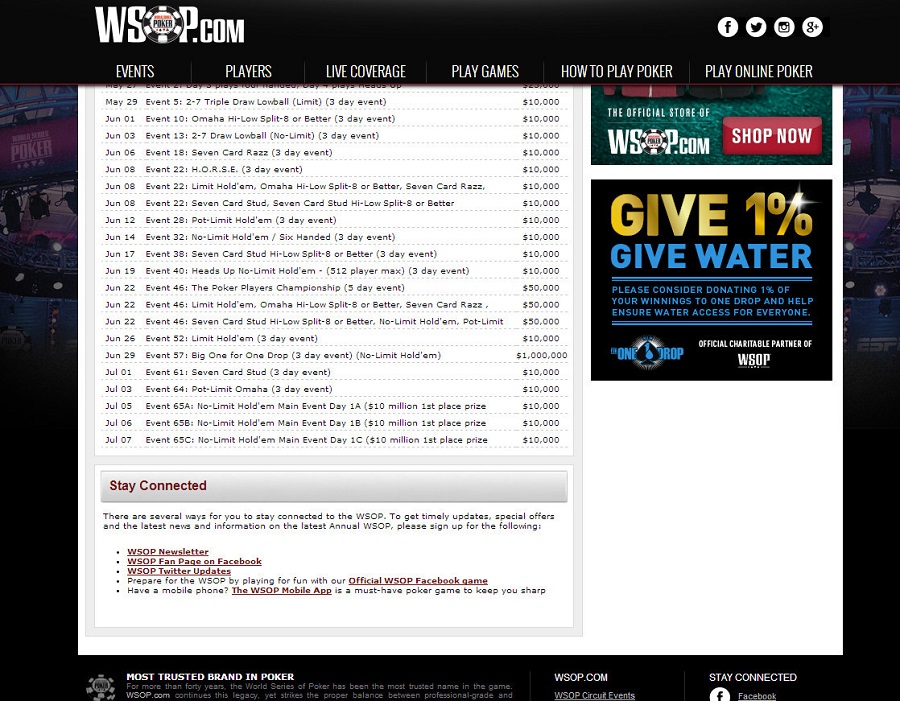 Did the World Series of Poker accidentally pre-ejac announce that the 2014 Main Event will have a guaranteed $10M first place prize?*

A thread popped up on 2+2 after poster PeteBlow was examining the 2014 WSOP schedule (above) and noticed that the Main Event listed a $10M first place prize. Later in the day, iGaming.org posted a story with a quote from WSOP PR head Seth Palansky:

Nothing is finalized yet. We’re still working through some things on the schedule and nothing should be taken as final.

The 2014 WSOP schedule has since been yanked down.

Now, these types of website leaks happen all the time. We even accidentally did it with one of our UB stories. So we’re leaning towards the “this is real, they just weren’t ready to announce it” storyline over the “it’s not finalized yet” one.

Back in 2008, we even had a few conversations with ex-commish Jeffrey Pollack about doing just this–making 1st a $10M payout. Our point was, if you want to make headlines, no mass media really gives a shit about another $8.3M first place prize. Restructure the pay-outs so first grabs $10M. That’s a great headline. What other sport can offer a $10M first place prize to the winner? He offered a lame excuse about Nevada Gaming never OK’ing such a thing, which was corporate speak for “that would mean I’d have to do some actual work.” We didn’t like that one bit. No shocker then if current commish Ty Stewart pushes something through that Jeffrey Pollack couldn’t.

There really isn’t a question of IF the WSOP should do this. It’s a no-brainer. And like last year’s Millionaire MakerTM event, possibly by just putting it out there, the field will swell so first place will get $10M without restructuring payouts or overlaying the money.