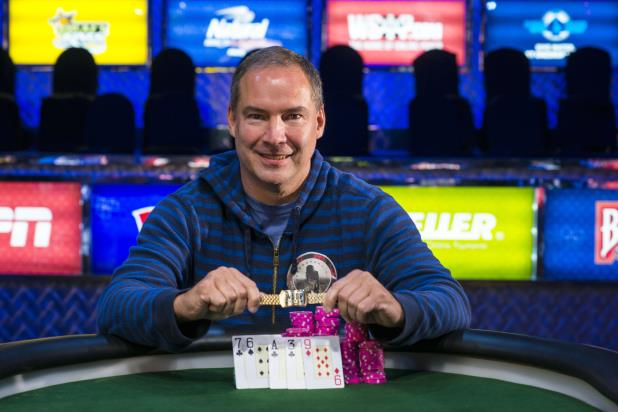 If Phil Ivey is the Tiger Woods of PokerTM, then Phil Hellmuth is the Jack Nicklaus of PokerTM.

Hellmuth was in pursuit of his 14th WSOP gold bracelet–which would’ve put him four ahead of Doyle Brunson and Johnny Chan (math math math they both have 10). Instead, Phil Hellmuth now has 10 WSOP second place finishes…

…thanks to Ted Forrest.

Hellmuth held a commanding chip lead going into heads-up play against Forrest in Event # 7 ($1,500 Razz). However, Forrest, who is considered among the best Razz players in the world, fought back. The two titans went on to exchange the chip lead 12 times before Forrest eventually prevailed, capturing his sixth WSOP bracelet.

A side note–with each Hellmuth final table appearance and near-title, it seems the poker community is finally accepting that maybe, just maybe, Hellmuth really is the best live tournament player of all-time. If nothing else, he’s indisputably the best WSOP player of all-time.

Get a full recap and final table results here.

In brief, some other news…

:: Event #8 (The Millionaire Maker II*) – A total of 179 remain from the starting 7,977. The immortal Yuliyan Kolev is the chip leader. Notable big stacks include the namesake of the Curt Kohlberg Anonomously Good All-Stars, Curt Kohlberg, Andrew Seidman, Athanasios Polychronopoulos, Allen “Chainsaw” Kessler, and the man the myth the legend, Black Phil Ivey, Big Sldick, the one and only Dwyte Pilgrim. Get full chip counts here.