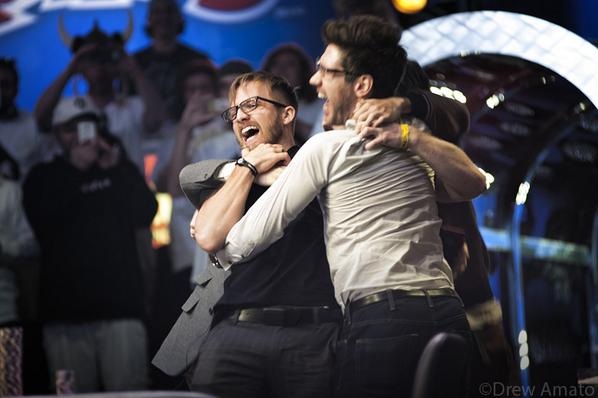 We were fortunate enough to receive access to the WSOP November Nine ratings on ESPN. All in all, it’s good news and a sign that poker is still healthy.

Ratings for the Monday night marathon were up 10-13% year-over-year, pulling .33 US HHs (459,000 viewers) that peaked with a .5. Given the competition against a key demographic (the show ran against Monday Night Football), this would be considered a strong win.

While these are not the same 1.6’s we saw in the heyday of televised poker, the numbers still outclass your typical regular season MLB, CBB and NBA game (and crushes MLS, even though MLS pulls a growing 18-34 male demo). And unlike MLB, CBB and NBA games, ESPN can re-air the shows to steady .3-.4 ratings throughout the year.

The WSOP on ESPN is also typically the #1 or #2 DVR’d show, something that “stick & ball” programming can’t claim.

Also it’s worth noting that unlike the 1.6’s in the heyday, these are not a 2 hour broadcast in primetime. The WSOP airs for an extended duration broadcast for nearly 12 hours one day and five hours the next. This is more of a disruptive strategy–one intended to overtake a network for two days rather than just pulling a specific rating.

Tuesday night’s broadcast in particular is encouraging. The final three was an absolute nut-kicker worst case scenario for TV viewership in the U.S., essentially pitting three mute non-Americans against each other. Between Gaelle Baumann and Elisabeth Hille shanking the final table in 2012, and Carlos Mortensen’s near miss last year, it’s like the poker God’s said, “Hey, we gave you Moneymaker, you’re good for awhile.”

Also encouraging is the uptick in the quality we saw in the POKER PROductions final product this year.

While we still strongly maintain that the WSOP and HPT in particular could benefit from putting more producers on the ground mining human interest stories—POKER PROductions found many ways to add entertainment value to this year’s show. It didn’t feel as isolating to recreational players as the previous few years, which may explain the only nominal ratings dip in 2013 vs 2014.

These are all positive signs. Over the second half of this decade, there will be more, not less, poker on TV. The fact that ratings are climbing or holding steady despite limited online market expansion to feed the beast—and that TV products are becoming more sophisticated and creative in presenting information—bode well for the industry and poker’s place as a form of mass consumer entertainment.