Home   2014 WSOP: Vanessa Selbst Is Awesome at Poker, Goes for Another Bracelet 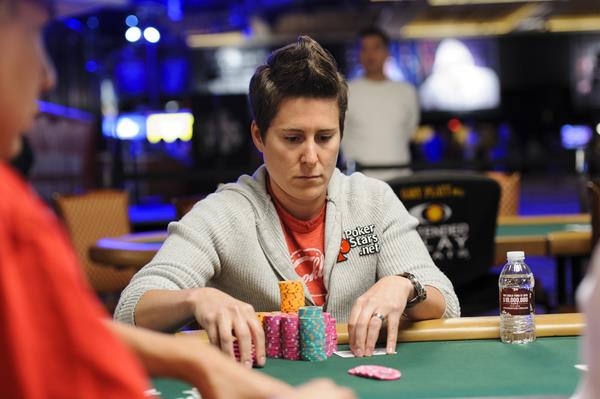 Don’t eff with her, Jason Mo.

The 2014 WSOP is officially in full swing. Five bracelets events were taking place simultaneously on Thursday. Here’s a quick recap…

:: Event #2 ($25,000 NLH Mixed Match) – We’ve written many times that poker could use more Vanessa Selbst’s. Super smart, brash, good TV, awesome and respected poker player. The aforementioned Selbst will go for her third bracelet on Friday. She faces Jason Mo heads-up for the Mixed Match title. If Selbst likes spite half as much as we do, she will mow-down Mo, who called her “so bad” on Twitter. A win would tie Selbst for the most bracelets all-time by a woman with Barbara Enright, a woman, and Kun Nan “Nani” Dollison, a woman.  restaurantor Alfred Decarolis finished third ($290,622) and the spectacularly-breasted J.C. Tran came in fourth (also $290,622). Follow the final table at 2pm PT here.

:: Event #3 ($1,000 PLO) – This record-setting event is down to six, with Steve Billarikis leading the way. Like Selbst, Billarikis is also gunning for his third bracelet. Get full final table chip counts here.