Home   Amarillo Slim Passes Away at 83 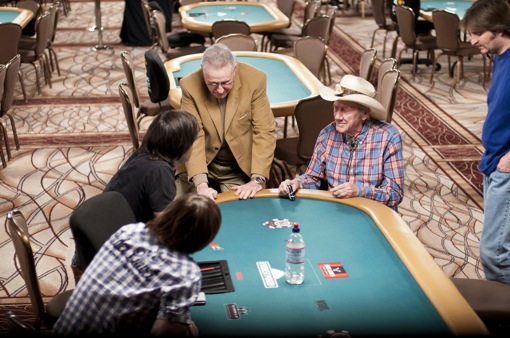 As we came to learn at this meeting with Amarillo Slim at the 2009 WSOP, the man lived an interesting, complicated, and challenging life.

The poker world lost a legendary–and controversial–figure early Sunday morning as Thomas Austin Preston, Jr., aka “Amarillo Slim,” passed away at the age of 83. Slim had been battling colon cancer.

Amarillo Slim was the first true poker celebrity. He parlayed a 1972 WSOP Main Event victory into a series of appearances on mainstream television shows, including as a regular guest on The Tonight Show with Johnny Carson.

Born on December 31, 1928, in Arkansas, Slim eventually found his way to gambling and poker. He forged friendships with Doyle Brunson and other old Texas road gamblers, and, through his celebrity, was instrumental in popularizing the game of poker. For these contributions, Slim was eventually inducted into the Poker Hall of Fame in 1992.

In May of 2003, Slim released an autobiography titled Amarillo Slim in a World Full of Fat People. The book was rumored to be turned into a biopic on his life, with Nicolas Cage playing Slim, but the project was dropped. Later in 2003, Slim was indicted in Randall County, Texas on charges of indecency with a 12-year-old child (and family member). Slim eventually pled “no contest” to reduced misdemeanor assault charges. He paid a $4,000 fine, served probation, and was required to undergo counseling.

Slim made sporadic appearances at the WSOP over the past few years despite his deteriorating health. Over his live tournament career, he earned $568,731 and four WSOP bracelets. His last live cash fittingly was at the Binions Poker Open in 2009.