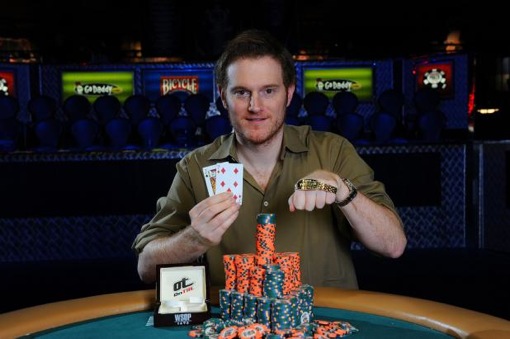 Finally, somebody from Duke has found success at something.

Capping off an incredible year-long run which included WPT POY honors, Andy Frankenberger defeated a field of 2,500 in Event #28 ($1,500 NLH) to capture his first WSOP bracelet.

So all of this begs the question: who the hell is Andy Frankenberger?

Last August, after he came out of nowhere to capture the WPT Legends of Poker, we wrote: “You may remember Frankenberger from…nothing,” (something the NY Post quoted us on and didn’t link through to, thanks a-holes). Point is, Frankenberger only had a few cashes to his credit at that time, although one was a Venetian Deep Stack win for over $160,000.

The 38 year-old went on to final table another WPT event, make a deep run in another, and join the likes of Howard Lederer, Erick Lindgren, Daniel Negreanu, and Gavin Smith as WPT Players of the Year. He also final tabled a WSOP Circuit event in December of 2010.

Frankenberger is a 38 year-old who lives in New York and is a former equity derivatives trader for BNP Paribas Bank and JP Morgan who quit his job to try his hand at poker. Dare we say… that the move… has paid off? The average equity derivative trader earns about $160,000 a year, which Frankenberger cleared in his Deep Stack win.

Like Vanessa Rousso, a woman, who went to Duke, where she graduated from Duke, Andy Frankenberger went to Duke after scoring 800 on his SAT in math. Whether or not he’s a first class asshole, as many Duke grads are, remains to be seen, but regardless, Frankenberger graduated with a double major in Economics and Russian (and he actually lived in Siberia for a year as an exchange student).

Said Frankenberger after his bracelet win:

“The kinds of things you do working on a trading desk are actually very similar to the things you do at the poker table. It’s all about risk management. When you are trading in the market, you are dealing with the uncertainty of what can happen with the market. You have your opinion about what will happen. And you have to weigh that and determine how strongly you want to place your investment. Similarly, at the poker table, you know what your two cards are. But you do not know what the other guy’s got. It’s all about risk management, not letting your ego get the best of you when you are wrong. Being beat up on Wall Street was great training. I did very well at it, but you’re never smarter than the market. You have to keep your ego in check. It does not matter if you are right. The same is true in poker. It’s a similar type of mindset and a similar type of thinking.”

Frankenberger moved to within shouting distance of the lead in the 2011 WSOP POY race. If he were to claim the top spot, he’d become only the third person–along with Negreanu and Lindgren–to win both WSOP and WPT POY titles.