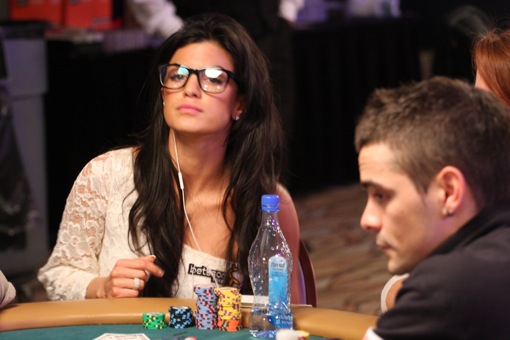 Aylar Lie busted out early on Day 2A of the 2011 WSOP Main Event.

Last year, Olympic gold medalist Petter Northug showed up at the Main Event with his then-time girlfriend Rachel Nordtømme. The rest, as they say, is Girls on the Rail history (official GOTR Hall of Fame voting starts next week).

Petter played the Main Event this year too, but unfortunately for us and for you, Rachel was nowhere to be found. Instead, (possibly) joining Petter and playing Day 1C was his now rumored fling Aylar Lie.

Aylar is an Iranian born hottie (though she moved to Norway at age 2) who is now a popular singer in Europe.

Christ on a cracker, between Rachel and Aylar and probably every able bodied hottie in Scandinavia, Petter’s penis has to be doing fucking backflips every day. That penis hit the vag lottery.

While Petter was still grinding away at mid-day with around 50k, Aylar was sent to the rail before the first break from what we can tell.

Pics of Aylar in the thumbs below as well as a few of Petter for the ladies out there.