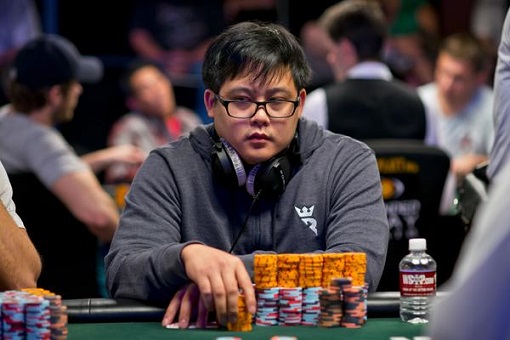 After four grueling days, the 2013 WSOP Players Championship has its final eight.

Two guys who have been near the top of the leaderboard all tournament–David Benyamine and Jonathan Duhamel (Duhamel)–also remain, with 2,709,000 and 1,627,000, respectively.

Duhamel is the only Canadian at the final table, meaning he’s the odds-on favorite to win the event.

We asked Merch for his thoughts on Canada’s domination of this WSOP. Here’s what he said:

Canada is my old pet raccoon, Mr. Belvadere. Oh boy, you didn’t think much of Mr. Belvadere at first, but he had a knack for finding the tastiest morsels in the trash. Unfortunately Mr. Belvadere bit my Cousin Ronnie one day. Ronnie got himself a bad case of the rabies. Let me just say, if you’ve never seen my Cousin Ronnie foaming at the mouth with rabies, it sure is a sight to see. More fun than the annual Crockett County Goat Rodeo, that’s for sure! Old Man Jenkins used to kick off the rodeo each year by saying, “Thanks for bringing your money, here’s the damn goats!” Old Man Jenkins, he sure is a prickly one.