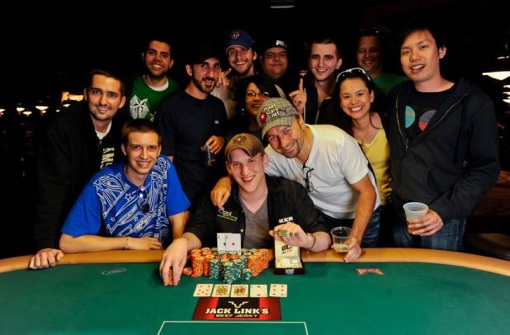 Hmmmm...see if you can figure out who backs Jason Somerville from the above photo. Just guess.

Two of the game’s most respected online grinders captured their first respective WSOP bracelets on Tuesday.

Somerville joins Brian Rast in becoming the second PokerVT pro in a week to win a bracelet. Apparently there’s some Good JuJuTM for VT pros who appeared on This Week In Poker. In related news, we’re working on getting a TWiP-ish version of TWiP going again from the WSOP soon.

ElkY has proven to be far from a typical two-year wonder. This is ElkY’s ninth major cash of 2011 and third victory (he’s also won two EPT High Rollers events). The win gives him nearly $8M in career tournament earnings and over $1.6M for 2011. We’re having a difficult time computing all of this, as ElkY is French, yet, he’s so often victorious. He’s like the Michael Jordan in a country full of LeBron Jameses.