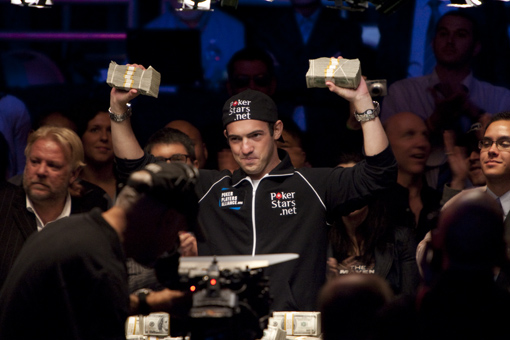 Joe Cada is one person on the Power 20 who is ranked way higher than he should be...

Bluff Magazine just released their annual Power 20 list (go grab a copy at newstands today!). It’s a bit of a different format now than previous years as they are only ranking individuals instead of companies.

Except for the first two places, in which case they ranked companies.

While we won’t debate the merits of ranking just individuals (except for 1st and 2nd), we will say that for the most part, it’s a good list. However, we do think the voting committee (which consisted of industry types from across the globe, not just the Bluff staff) did make some mistakes.

Mind you, no list is ever perfect unless it involves a list that we came up with, in which case said list in inarguable. Or if you’re making a list ranking the numerical value of numbers. Numbers don’t lie, bitch. But anyway, as we see it, here are the biggest mistakes in the list:

Biggest omission: Gotta be either Phil Hellmuth or Annie Duke. While Joe Sebok deserves recognition for his on-going role with Poker Road and Poker2Nite and his bazillion Twitter followers, not having a UB rep (a company which spends a LOT of money when not stealing a LOT of money) and inarguably two of the five most recognizable names in all of poker on the list doesn’t add up. Special mention to durrrr as a major oversight as well. He was probably the most discussed person in all of the poker community last year.

Biggest overranking: Joe Cada. That one was easy. While Cada should be on the list, he shouldn’t be ranked over Daniel Negreanu and Phil Ivey. Or Phil Hellmuth or Annie Duke. Or durrrr. Or just about anyone up to #16.

Other major changes we’d make: either put Barney Frank in the top 5 or don’t bother listing him at all; Brian Balsbaugh/Poker Royalty goes into the Top 10; and Mike Sexton either falls down to around 20 or is out. Great guy, but that’s more lifetime achievement than anything.