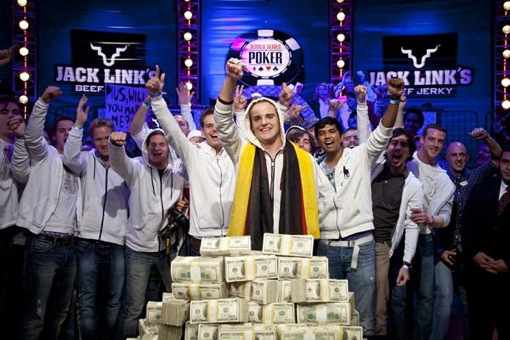 The overnights for the 2011 WSOP Main Event final broadcast on Tuesday were strong, holding an average 1.01 rating during the 6.5 hours of live broadcast.

While that’s down from last year’s 1.28 produced primetime 2-hour comparable, the 1.01 rating stretches over six hours, bringing significantly more eyeballs and exposure overall. This despite losing arguably the most well-known and marketable (and American) of the bunch–Ben Lamb–on the fourth hand.

In all, that’s a major win for the WSOP and the viability of live poker programming in general.

We expect to see the broadcast finals out sometime by end of day Wednesday.

We’ll have our take on this year’s overall WSOP ratings–for both produced shows (down) and live shows (solid)–and the future of poker on TV in general–on Wicked Chops Insider by Thursday.