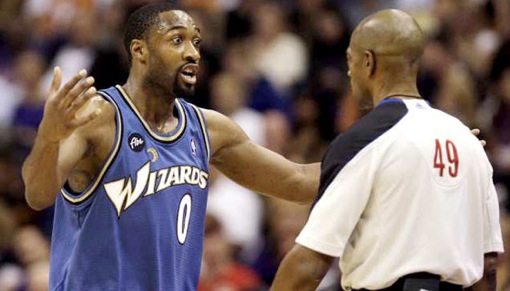 Then Crittenton called my all-in on the turn with just a gutshot and the donkey hit it...so then I brandished four weapons on his ass in the locker room. Allegedly.

Each game Agent Zero goes without pay costs him $147,208, or about an average-sized pot if you’re playing isildur1.

Multiple sources told ESPN.com that an argument commenced during a card game on the team’s overnight flight back to Washington from Phoenix on Dec. 19 and escalated into a heated exchange between Arenas and Crittenton. The Wizards had Dec. 20 off, but sources say hostilities between the two Wizards guards resumed Dec. 21 in the locker room on a practice day.

Read more about it here.