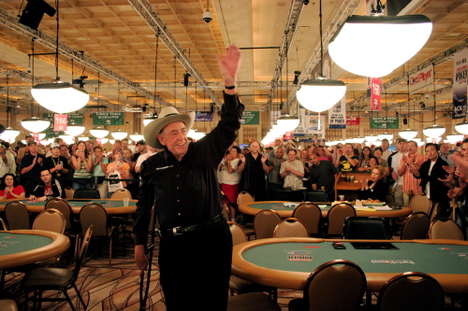 Doyle Brunson will have everyone pulling for him in the Elite 8.

The Elite 8 is set at the 2010 NBC National Heads-Up Poker Championship.

For most, the biggest shocker is probably Jerry Yang. Given he has exactly one cash since winning the 2007 WSOP Main Event–and that was in 2007–nobody had Yang advancing far in their brackets. Good for him though, as now he’ll earn an automatic invite back next year and won’t have to put the NBC HU officials in the weird spot of making him the first Main Event winner in the modern era without an invite.

For us though, the biggest Elite 8 shocker is Doyle Brunson. Texas Dolly wasn’t even going to play this tournament, but he keeps grinding away, and now would actually have to be considered among the favorites.

UPDATE: Play starts at 11am PST. A few additional thoughts: 1) We’re pulling for The Shadow. Yep. The Shadow. We said it. One-time for “One…Mirron!” 2) We’ve been saying for awhile that there hasn’t been a break-out star for years in poker. The five or so biggest names before the boom (Negreanu, Hellmuth, Scotty Nguyen, Doyle, Ferguson, Duke, Moneymaker, etc.) are still the biggest names to the more mass poker audience. Could Jason Mercier make “the leap” by winning the event? Player of the Year…young guy…pretty good TV persona…meh, maybe. 3) While having two former WSOP ME champs on one hand is good…if the final is between Eastgate and Yang, what kind of a ratings would that pull? Would it make Face the Ace look like American Idol? 4) If the final comes down to Doyle and Seidel, and they end up tied after two matches, can the third match be determined by tweet-off?

UPDATE II: Seidel vs. Nguyen, Phillips vs. Duke in semis.