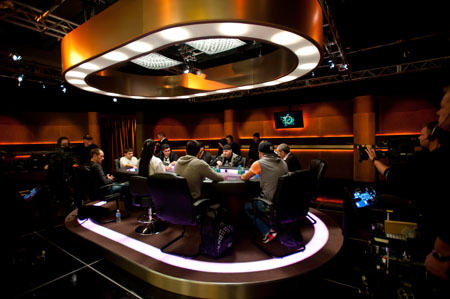 What did you think of the 2011 PCA Main Event live-ish broadcast?

The PCA has turned into the biggest event in poker next to the WSOP. 48 events. Multiple million dollar top prizes. Deep and diverse fields. Well done, PokerStars.

For us, the 2011 PCA culminated with its Main Event final table: sequestered participants, a dedicated block of airtime on ESPN2, and the closest attempt we’ve had to a live-with-hole-cards major event broadcast since the boom.

It was an interesting experiment with plenty of pluses and minuses. Here’s our take.

First, the positives: Overall, the production quality was fantastic. The set was classy–top notch–exactly what you’d expect from Stars. It almost felt like that old school classic PokerStars virtual room.

Daniel Negreanu and The British Guy did a solid job keeping the broadcast moving. Their commentary was interesting and informative for the duration of the broadcast–which is nowhere near as easy of a task as you’d think. They had A LOT of dead time to fill. Clearly Kid Poker has a knack for the booth.

From many standpoints, A+ across the board for PokerStars and their production team, 441 and Matt Marantz.

Now, the reality:  the 2011 PCA Main Event broadcast will not attract one single new player to PokerStars or the game in general.

In fact, it may turn some casual fans away…

We’re looking at this from purely a business standpoint. The PCA broadcast continued the trend in poker TV to use advanced stats/terminology (presumably to appeal to the 2+2 crowd, a vocal, critical group). And in that regard, the broadcast knocked it out of the park.

But the 2+2 (and like-minded) crowd already has PokerStars accounts. They already watch poker on TV (for the most part). Just as many of them would’ve watched this broadcast had it been streamed live on the so-called Internet on ESPN3 as they would’ve on the Deuce.

For a casual viewer though, this was a slow and plodding broadcast (especially when juxtaposed against the NFL playoffs, which the final table was up against). There were practically no transitions, no cutaways to Negreanu and The British Guy, no player interviews before or after breaks (think coaches interviews before/after the half in pro sports). Once play was underway, there were no packages on the players, something that would’ve inserting life and a much needed change-of-pace to the broadcast. Nothing. Just poker, stats, analysis, and more poker.

Contributing to the blandness was the set itself, something which we praised earlier. Had the broadcast done any of the elements we just mentioned (packages, cutaways, etc.) the set would’ve been fine. But without it, no good. Granted, we’re well aware of the complexities of shooting a poker event outside (especially when taking into account the sequestering issue). But if you’re a mainstream viewer, and you’re flipping through channels, and you come across that set and that plodding pace, you keep flipping. Had the set itself been sexier–more unique–you would’ve at least had a chance to grab a casual viewer.

Simply put: you make the set look like something the audience has never seen before as a way to grab them into watching a poker event that has never been done before.

Aside from that, there are some issues with a live-ish broadcast that are just completely out of PokerStars’ control.

During the post-Moneymaker boom–poker was sexy. It was fun. It was a game dominated by degenerates with strong personalities. It was more feel and intuition than straight math.

Now–it’s a parade of 20-something math savants with little-to-no table charisma (table being the operative word–which is why packages and features on the players are so critical). That’s nobody’s fault. It just what it is.

So if closer-to-live final tables are going to become commonplace, it’s up to the production companies and broadcasters to start getting creative and manufacture the much needed excitement (or in other words, get all-Olympicy on people’s asses). If players are going to be void of personality at the tables, create some packages and insert personality into the broadcast. Give the casual viewer at least a chance to become emotionally invested in the players. Otherwise, they’re just going to tune out.

In the end, we ultimately don’t know what PokerStars’ end-game goal with the broadcast. If it was to solidify the base, then money well spent. But if it was to actually acquire new customers, time to go back to the drawing board.

Having said all of that, all in all, it was an expertly executed broadcast. It was just boring to the mainstreamers, which is where all the growth in the game is. It’s time to take a contrarian view of how to make a poker broadcast, get the ratings up, and bring new players into the fold.

* Image courtesy of the PokerStars Blog.