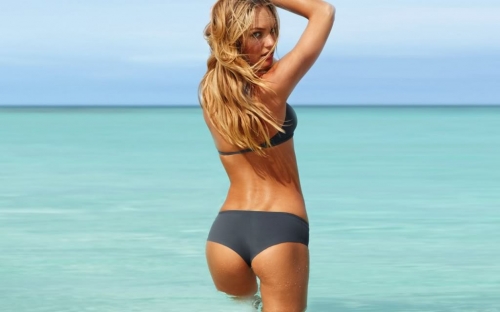 We're a little slow on the poker news this week, so here's a little Candice Swanepoel to make up for it.

Busy week for the Entities, so we were light on the news/analysis. If we believed in apologies, we’d apologize.

Bad week to be busy, as there were a lot of meaty stories out there. So to not-really make up for it, here’s a link dump with abridged summation analysis of the good stuff.

:: The yet-to-be-named Federated not-quite-totally-professional and not-exactly-a-tour-or-league announced its tournament schedule last week. While the league (or federation? tour?) is supposed to be “Switzerland,” there are two event conflicts with PokerStars (EPT), one with the WSOP Europe, and another with the Full Tilt (Aussie Millions). Yes, it’s a crowded tournament schedule these days, but they’re not exactly ensuring a field with all the tops names as currently constructed. [link]

:: The Donkdown guys accomplished something even we couldn’t do–get a hold of UltimateBet super-user scandal central player Travis Makar. It was a really captivating 60-minute interview. While there are a number of questionable details in his story (i.e. 1. What federal case? 2. The super-user scandal was long-over by the time Annie Duke was on Celebrity Apprentice, pretty sure that’s not where all the charity money came from… 3. No seriously what Federal case???, 4) Russ Hamilton is a loyal guy?)– there were still a lot of things he got right. A must listen. [link]

:: The interview was followed up with a blog post by Haley Heintz revealing brainwashdodo‘s true identity. [link]

:: NJ’s intrastate poker bill is far from being a done deal. Our sources say the two most likely outcomes right now are that: 1) Governor Chris Christie does not sign it into law, or 2) he puts it up for public referendum. If NJ doesn’t pass the bill, will that fast-track it in California or Nevada? Or slow it down? We don’t know, but expect a lot more twists and turns. [link]

:: We’ll do a podcast on it early next week, but Casey Abrams is our collective new fave on American Idol. [link]

:: And finally, a great research study done on Zynga‘s potential impact on the poker economy by the OnlinePoker.org group. Another must read. [link]