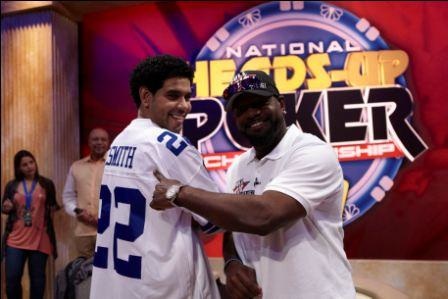 Emmitt Smith was the lone celeb survivor in Round 1, while online stars shined...

It was a joyous first round for 2+2 or those who think that online players should dominate the NBC National Heads-Up Poker Championship.

It wasn’t a good day on the celebrity front. Only Emmitt Smith managed a victory, defeating David Williams. Otherwise, Jennifer Tilly lost to Doyle Brunson; Jason Alexander was defeated by Liv Boeree; and the aforementioned Don Cheadle was taken down by durrrr.

Some interesting Round of 32 matches today include: Olivier Busquet (many people’s pick to win it) vs. Liv Boeree; Daniel Cates vs. Chris Moneymaker; Tom Dwan vs. David Benyamine; and Vanessa Selbst vs. Peter Eastgate.

Get a full bracket breakdown here.