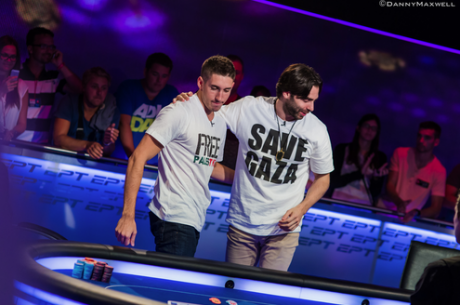 Earlier this week, Dan Colman and one of his OneDrop backers, Olivier Busquet, played heads-up for the €50,000 Super High-Roller title at the EPT Barcelona.*

That alone would normally make for decent poker headlines. Busquet and Colman took some TNT with them to the final table though, deciding to wear t-shirts that read “Free Palestine” (Colman)** and “Save Gaza” (Busquet).

The poker social media mob went predictably bonkers, and eventually PokerStars‘ released the following statement to CardPlayer Lifestyle (not to be confused with CardPlayer) deciding to ban polictical statement apparell at their events:

Now the inevitable and equally predictable backlash to the censorship of political statements at events is coming in.

Whether you agree with Colman and Busquet’s political leanings is irrelevant to this post. We are focusing simply on this: Does PokerStars, WSOP, WPT, and HPT have the right to censor political statements or what they view as inappropriate content from their events and broadcasts?

International corporate entities like PokerStars can set whatever standards they’d like for what they feel is the best interest of their brand and profits. PokerStars’ founder, Isai Scheinberg, and CEO pre-Amaya acquisition, Marc Scheinberg, are Israeli. A sizable swath of their customer and employee base are Isreali.

If they don’t want to alienate that customer and employee base, they have the right to do so.

This issue isn’t about free speech as we know it in America. It’s about business. And PokerStars made a reasonable business decision.

An appropriate response to that then is: where do you draw the line? PokerStars’ statement was fairly broad. What is acceptable? What will be tolerated?

That’s for PokerStars to decide. If you don’t like the policy, don’t play the events. Pretty simple.

PokerStars is acting in what they feel is in the best interest of the business. The small number of people who may stop playing their events because of that decision is significantly fewer than the customers, employees, and shareholders they potentially alienate by not taking action.

** So Colman couldn’t say one positive word about the OneDrop charity event he played in and won–but decides the Israeli-Palestine conflict is where his voice should be heard? For the love of…