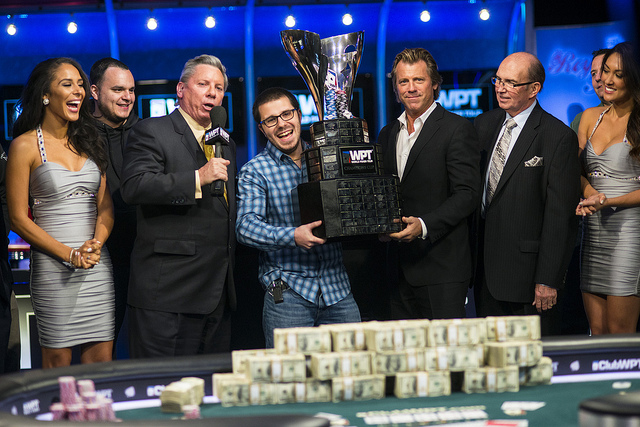 The spoils of victory.

The win, dare we say, was a coronation of sorts for Smith, who becomes the latest WPT millionaire. He banked a $1,161,135 purse for the conquest, pushing his career live tournament earnings to a stately $5.6M. This is the third $1M+ win for Smith over the past two years.

I tells ya, I haven’t seen a two year run like this in a sport since ol’ Penn Wickersham dominated the Bobbin for Pigs Feet competition at the Redneck Games in East Dublin, GA. Little known FACT: I used to cover the Redneck Games as a live blogger for the Standard Banner out of Jefferson City, TN. Now where was I? Oh yeah, ol’ Pendleton Wickersham, or Penn for short, he was like part man, part Grizzly Bear. And I’m not just saying that because his pubis region looked like a baby grizzly either. Somebody buy Penn a razor! Now where was I? Oh yes, the Redneck Games. Ol’ Penn dominated that Pigs Feet bobbing competition like it was his job, which I believe it was. Penn couldn’t hold down a real job, unless you cornsider ‘public intoxication and urination’ a full-time job, which I personally do not. People would bet Penn that he couldn’t bob a certain amount of pig’s feet in a certain amount of time, but he’d always do it, earning upwards of four fiddy a pop. Unfortunately you can’t stretch $4.50 like you used to, even off the McDonald’s value menu. Now where was I? Oh yeah, titties.

To view more of the Redneck Games, go here.