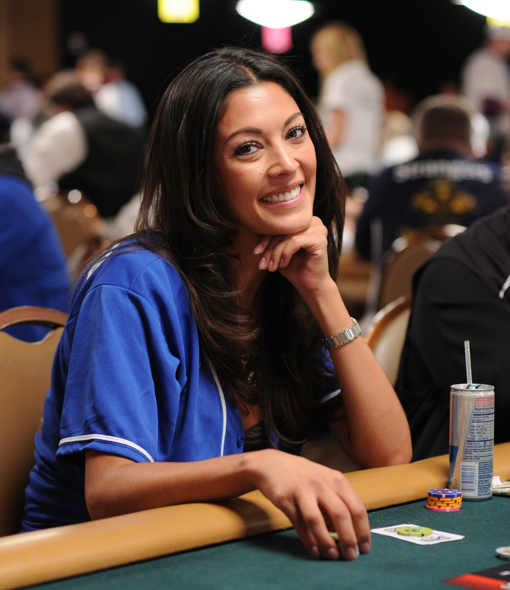 Lacey Jones' teammate Christina Hall managed to outlast all three Entities in the Dream Team Poker Tournament yesterday. We'd like another shot at outlasting her though. In bed.

Day 2 of the WSOP Dream Team Poker tournament is underway with the final 27 players back to compete for both the individual and team title.

Still in the thick of it is our Dream Team Poker freeroll winner London Gallagher, a woman, who starts today with 125k in chips, putting her in 11th overall. Not still in the thick of it is Gallagher’s Wicked Chops Poker II teammates Susan Genard, a woman, and Shannon Hartman, a woman. They did however win a dinner with the Entities after busting out last night, so they do have that to go home and high five their friends about.

Speaking of, the Entities all busted before the dinner break, thus ruining our 118% average of at least one of us making a final table in a tournament that all three of us play.

The chipleader at the start of the day is Roberto Diaz (Team Reckless) with 332,000. Notables still in include pro Kenna James of Team Poker Host (140,000) and representing the so-called “poker media” Dan Michalski (113k) and Dr. Pauly (158k) of Team Tao of Pokerati. Everyone else needs to do something with their lives to make themselves better known. No idea who they are.

A total of 122 teams entered the event which if you multiply that by three on a calculator comes out to be a total of 366 runners. The total prize purse is $177,510 with the first place individual winning $16,473 and the first place team splitting $33,017 three ways.

More on the Dream Team Poker tournament over at Pokerati and Tao of Poker.

UPDATE: Congrats to Tao of Poker as they are the team winners. Unrelated, Christina Hall in a bikini.

UPDATE: They’re down to the final table and Team Wicked Chops Poker II’s London Gallagher is still in. Chip leader is some lady named Judy.