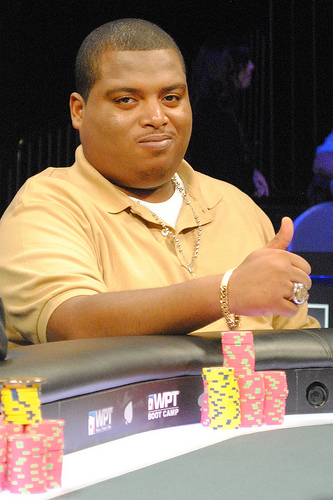 He’s got more nicknames than P. Diddy:  The man, the myth, the legend. Black Phil Ivey. Big sldick. The Bronx Donkey Bomber. Google Earth. A Rick Mahorn for the 90’s.

For the win, Pilgrim banks $733,802. He defeated Kia Mohajeri heads-up for the title. Tweeted BJ Nemeth after the win:

This may be the funnest final table I’ve ever covered. @OleGSmith‘s bracelet victory was more meaningful & emotional, but this was pure fun.

After the win, Pilgrim fell to the ground and began crying. The crowd gave him a standing ovation. President Obama called his cell phone and congratulated him.*

It was emotional. It was heartfelt. It was fun. It was overdue. It was Dwyte Pilgrim.

UPDATE: Some good pics of Pilgrim crying after the win here. Vid interview with Kimberly Lansing below where he reveals he’s about to enter a $175 and a $300 in the coming days. Keep grinding.