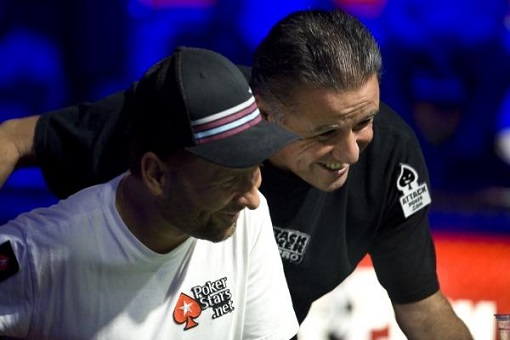 I just can’t quit you.

SPOILER ALERT: and that final table finished exactly in the order that we listed them.

Negreanu held the chip lead going heads-up, but Elezra steam-rolled from there. Negreanu was in typical good spirits though, increasing his 2013 WSOP POY lead with the second place finish.

Follow all Main Event action today on wsop.com. You can feel the buzz already. Should be a good one. How strong is the buzz? We asked Merch for his thoughts:

The buzz for this year’s Main Event is stronger then the buzz you get off one sip–ONE SIP–off Old Man Jenkins’ patent-pending moonshine. Whoa nelly, that’s some potent stuff. It’ll get you drunk, but it gives you some vicious breath. You can knock a buzzard off shit mountain with your breath after sipping some of Old Man Jenkins’ moonshine. Drink too much, it’ll make you mad. Old Man Jenkins is known to walk around snapping his suspenders while yelling obscenities at the sky every Monday through Saturday. He doesn’t drink on Sunday though because that’s God’s day. Old Man Jenkins, that prickly bastard.