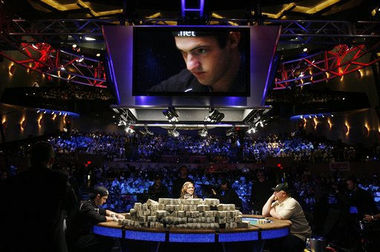 441, the company responsible for evolving WSOP production to eventually look like the above, is now in bed with Epic.

We learned early last week that the Epic Poker League has partnered with 441 Productions for television development.

441 was the production partner for the World Series of Poker on ESPN from 2003 until this year, when Poker Productions took over.

Led by Matt Maranz and Dave Schwartz, 441 (along with the WPT) pioneered poker television production and have a sterling industry rep (save a few pushy camera guys at the WSOP). No word if David Neal (this guy, legit) will still be the broadcast’s creative lead.

In related news, also no word yet on an Epic broadcast distribution partner. Talk from Epic management has been of  a “major” (or dare we say…epic?) distribution channel for months. Initial rumors indicated the partner would be CBS. Then we heard CBS Sports. Then most recently we heard FSN. So really at this point, when it comes to a TV distribution partner, well, you know.

In semi-related news, this.