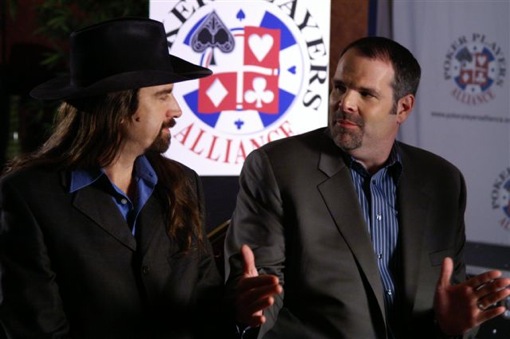 “…Epic Poker League’s Standards & Conduct Committee indefinitely suspended League members Howard Lederer and Chris Ferguson. The Amended Complaint named Lederer and Ferguson as defendants, specifically in relation to their roles as directors of Full Tilt Poker from April 2007 to April 2011….Although the Amended Complaint constitutes a civil, and not criminal, action and facts are alleged but not yet proven, “the specificity of the allegations and the fact they came from the United States government made this the right course of action in the best interests of the players in the League…The Committee will continue to monitor the legal actions. “If other members are named in the actions, the Committee will consider additional disciplinary action.”

The suspensions of Ferguson, and in particular Lederer, is yet another PR blow for the fledgling league.

While the 2011 WSOP brought in record numbers, and the WPT and EPT continue to exceed expectations, the EPL’s second Main Event brought in only 97 players, around a 30% drop from the first event (the second ProAM performed even worse, dropping over 50% in participation). The inaugural event was won by David “Chino” Rheem, who then was quickly put on probation for debts owed to the poker community (a slippery slope given the industry). Then, during the second ProAm, Michael DiVita, a registered sex offender, won a Main Event seat, but was not allowed to play in the Main Event or even claim the value of his $20,000 seat.  DiVita claims he was bullied/intimidated by league officials into just accepting a refund of his $1,500 ProAm buy-in.

By not doing so, they’ve established themselves as the judge and jury and moral arbiters of the poker community. And while they have every right to do so if they want to, they’ve set themselves up for more and more difficult decisions down the road.

However, and ultimately in their defense, they may not have had any choice in the matter. The shareholders and management of Epic likely recognized the potential shitstorm of having the brother of their commission–Annie Duke–receiving a mountain of bad mainstream press, and wanted to distance the company–and Duke– from it. “Hey–we suspended the commissioner’s own brother–that’s how serious we take these charges,” is a good story to spin to advertisers, TV networks, and investors.

So are Epic’s ethics committee’s decisions painting the league in bad corner after bad corner? Yes. Should Epic have suspended Lederer and Ferguson so soon without any criminal charges or due process? We’d say no–at least not yet. But did Epic have any other choice? Probably not.