Home   Epic Poker League: What Will Be Considered a Success? 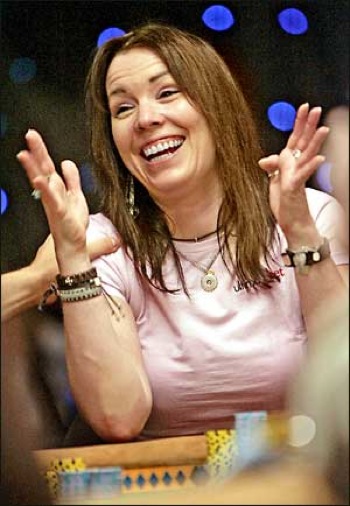 Annie Duke is betting that Epic Poker's success will be thiiiisss big.

Giving credit where it’s due: going from a PowerPoint concept to an actual real, living event with a (time-buy) TV partner and palpable enthusiasm from a swath of players in one year is a major achievement.

But getting there is one thing. Making it a success is another.

With that in mind, what will constitute a success for Epic, from the public’s perspective?

In talking with a number of people in the industry, we’ve condensed the general consensus for what would be considered Epic success…

On the low end, we’ve heard about 110 of the 252 eligible pros will play. On the high end, we’ve heard 150. The most consistent expectation though we’ve heard is around 120. So we’ll set the line at 121.5, which would equate to around 40% of the overall eligible “roster” (and for what it’s worth, we’ll take a slight over on that line).

Some pros we spoke with mentioned that, given post-Black Friday poker economics, the buy-in was a problem. They no longer have $20k “sitting in the cushions” of their sofa. While many pros were bankrolled through the WSOP, with so much money still stuck on Full Tilt and no sponsorship dollars coming in, a $20k drop is just too steep.

Getting backers is an issue too. As one pro put it, despite the overlays, with money as tight as it is now, given the quality of the field, there “isn’t a lot of value” in putting their horses in.

In the past, getting TV exposure was absolutely crucial to landing sponsorship deals, which led to more entrants. However, there aren’t any online poker sponsorship deals domestically any more. And the number of mainstream deals out there are few and far between (Vanessa Rousso, a woman, who went to Duke, with Go Daddy being one of the only examples).

Some of the issues are travel related. A number of pros who qualified for Epic are European-based, and having just spent the summer grinding WSOP events, many are back home.

Our Take: Expect most of the top new, young players to enter. They’re lured by the possibility of good exposure that has escaped many of them in the past. Expect more of the top “name” pros to not play. They’ve seen these leagues come and go, and they’ll take a wait-and-see approach.

To follow up on the previous paragraph, the Epic management team is desperately trying to convince some of the top guys to play. One of the Holy TriumvirateTM, Daniel Negreanu, has publicly stated that he’s out. Phil Ivey won’t be playing either. Phil Hellmuth hasn’t committed yet but we’d be surprised if he actually sat this out.

Of the remaining big names that the general public knows, that would leave Doyle Brunson, Mike Matusow, Chris Ferguson, Scotty Nguyen, and Annie Duke (give or take a Johnny Chan, Chris Moneymaker or Erik Seidel). We know Annie isn’t playing. Matusow was looking for a backer and is now trying to qualify via the Pro-Am. Whether Doyle or Scotty plays remains to be seen.

If none, or one, of the most recognized and marketable pros don’t play, yeah that’s a problem. There’s a reason why ESPN consistently puts Negreanu, Hellmuth, and Ivey at featured tables. They bring in viewers.

Our Take: If Epic is truly trying to elevate the profile of lesser known top pros, then NOT having the big names in the event would theoretically be a good thing. It removes the top names as a crutch. However, that may not bring in the casual viewer.

NBC Heads-Up is a great comparable. It pulls in big numbers because they do a great job of sucking in viewers by showcasing known pros and celebrities. They can then build a story around the lesser known pros if needed. If Epic simply can’t do that–the public may not even give it a chance.

Sounds good. And some players have clearly bought into it.

We’ve heard Mike Matusow rail against the WSOP for not taking care of the players. They believe the WSOP takes much rake. Players only get $10 food comps. You name it.

What players like Mike fail to realize is that without the massive, insane amount of exposure they get from the WSOP (the WSOP has about 600 hours worth of reairs on ESPN channels during a year), guys like him wouldn’t have (or had) their juicy sponsorship contracts. The WSOP built fortunes for players, which had a trickle down effect in that either site operators (like Full Tilt) or sponsored players were able to back more people and put more up-and-comers in events, building many new careers.

Players also believe that they’ll get a slice of whatever revenue Epic generates. But zero percent of zero is zero. With a time-buy broadcast and no advertisers, where is the money that the players are going to split coming from?

Our Take: It’ll be years, at best, before Epic generates income for the players. And while having no rake, juiced tournaments is great for the players, it’s not a sustainable business model. It’s something that, economically, can’t last. It’s a nice sentiment to cut the players in on those revenues, but again, what revenues?

Ultimately, the success of the league will be dictated by how well the broadcast does.

It was a smooth strategic decision by Epic management not to announce the time their time-buy will air. Maybe they still haven’t negotiated the slot yet.

Or maybe it’s just not a good slot.

Also, as we saw with Full Tilt’s Face the Ace, just because you’re a time-buy doesn’t mean you’re guaranteed air-time. If the show pulls poor ratings, CBS will pull it. And then Epic is just left with the Velocity channel, which hasn’t even launched yet, and when it does, it’ll only be in around 40M households.

Our Take: Maybe with David Neal and 441 behind it, Epic will capture the public’s imagination like the early World Poker Tour broadcasts did. If so, huge win.

If not, well, you know what kind of a failure it would be.

People think we’re Epic haters. But when it comes to WCP, we’re more like Epic realists.

Jeffrey Pollack and Rogers & Cowan have spun a great story for the league. They’ve built (and bought) great buzz. But when the rubber meets the road, there are some harsh realities around the broadcast and business.

If Epic exceeds expectations, and this first event is a success, it could build momentum and be great for the players and for the poker media, who Epic has admirably hired many of during trying post-4/15 times.

If the first event isn’t a success, Epic will spin it that this is a marathon, not a sprint. And they may be right. But with such small margins for error, the first event needs to come out the gate strong, build momentum, and build a future for the league.