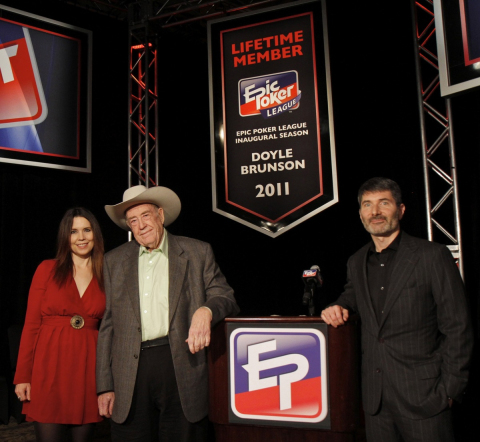 It was two years ago today that Federated Sports+Gaming, the parent company of Epic Poker, Heartland Poker Tour, and the GPI went down in a blaze of non-glory.

For those in need of a refresher, Federated Sports+Gaming was primarily the brainchild of Jeffrey Pollack and Annie Duke. They teamed with ex-YouBet executives Michael Brodsky, David Goldberg, and wannabe execs Jeffrey Grossman and Vito Iaia, to launch a social poker site, TV tour, and player ranking system set to “revolutionize” the industry and “celebrate” players. They acquired HPT and tried to acquire WCP while also trying to eff us in the A.

It’s been a fascinating fallout post-bankruptcy. First, like Bart Simpson, we would NEVER actually do this. However, we will take a look at what’s happened to most of the key players since this happened. It’s been amazing to see how some good people in poker have flourished, and how others just aren’t around any more.

Doing Well, Thank You Very Much…

441 Productions – 441 helped usher in the poker boom by expertly producing the 2003 (and subsequent next 7) WSOPs. As the production team for Epic Poker broadcasts, expectations were high that they’d capture lightning in a bottle again and catapult Epic into the mass public consciousness. However, they got stiffed on the bill for the third (and final) show, putting the company in danger of shutting its doors. However, cream always rises. 441 is flush with work now. Their current portfolio includes Jim Rome on Showtime, a series on the Travel Channel called Ace The Game and the critically acclaimed Friday Night Tykes.

HPT – Despite not collecting on the full acquisition price of their company, HPT co-founders Todd Anderson and Greg Lang still received multi-million dollar paydays and were the only people who really “got paid” in the whole Epic mess. They both have gone on to launch new TV products. In the Fall of 2012, Todd received over 7-figures in financing from Rush Street Gaming to launch Poker Night in America. The tour has held three events to date. Their 30-minute show is scheduled to begin airing April 27th. Greg Lang went on to launch Hard Charge, a fun mud-running and obstacle course competition. Hard Charge airs nationally on Comcast Sportsnets and Fox Sports. HPT was acquired by Pinnacle Entertainment during the Federated bankruptcy auction. Run by Jen Mastrud, the tour completed its most successful year to date, with a record number of events (including an expansion into California) and has nearly doubled its TV distribution.

Ginny Shanks – After taking a flier in investing in her old friend Jeffrey Pollack, Ginny went to oversee the HPT acquisition. She’s since been instrumental in one of the industry’s largest mergers between Pinnacle and Ameristar.

Kat Kowal – Kat was the only “senior” level FS+G’er who actually, like, did work. While her seniors were busy acting like executives, Kat was actually busy. During her brief stint with FS+G, Kat learned the in’s and out’s of HPT’s business, and has undoubtedly helped apply some of that knowledge to the growing DeepStacks Poker Tour. She currently works as Director of Integrated Media at FreeMantle Media, producer of shows like American Idol.

GPI – Many people forget that the GPI is the spawn of Epic. After taking a brief break from snapping selfies, Alex Dreyfus of Zokay Investments acquired the GPI and has since blown it up to be what some consider the top ranking system out there (others would argue it’s still BLUFF). Zokay kept GPI creator and ex-FSG’er Eric Faulkner on as an adviser.

The Poker Media – After Black FridayTM, Epic provided a lifeline to many good content producers in the poker media. Without getting into everyone’s individual case, let’s just say Epic turned out to be a valuable stopgap employer as the poker economy sorted itself out.

The Players – Judging by the continued success of the WSOP, WPT, HPT, DSPT and others, poker players are still playing at record levels. However, the Epic qualifiers never got a chance to compete in that end-of-season freeroll.

Daniel Negreanu – Daniel faced some criticism at the time for being the only big name pro who openly called out Epic for what it was. Turned out he was right. Daniel has gone on to have his best years as a pro, and currently sits as the #1 player in the world on the BLUFF and, yes, the GPI rankings.

WSOP – Despite public proclamations, behind the scenes it was very much Pollack & Co’s goal to usurp the WSOP as *the* brand in poker. Since replacing Pollack as WSOP head, Ty Stewart has grown the WSOP to record revenue and participation.

Michael Brodsky – At the end of the day, Brodsky was the Alpha male of the Epic group. He wore the pants. Brod the Bod as he was known** was the first to remove himself off of FS+G’s Board of Directors page, and has since further distanced himself from the poker world. Brodsky served on the Board for Churchill Downs (a condition built into the YouBet acquisition). He’s now on the Board of AltiGen Communications, Inc. (OTCQX: ATGN), the leading provider of integrated Microsoft-based Unified Communications solutions, whatever the hell that is.

David Goldberg – Kind of the #2 to Brodsky, after having stepped in an epic pile of #2, Goldberg has also left poker. He had a brief stint as a consultant for William Hill, but then went on to become Chief Strategy Office at ScoreBig.

Vito Iaia – Despite having a ridiculously fun last name to say (pronounced Yah-Yah), Iaia is also out of poker. He’s now Managing Director at YPlan, an app that will be competing against a bazillion other apps for your download. He’s also still friends with Annie Duke. Yah-yah.

Annie Duke – Speaking of Annie, she’s also out of poker. Annie has rebranded herself as a master in Decision Science. That might actually be the best decision she’s ever made.

Jeffrey Pollack – Post-Epic life hasn’t been smooth sailing for Pollack. He also had a very brief stint as a consultant with William Hill. He helped facilitate the sale of the Memphis Grizzlies. He’s sniffed around working in eSports. He was in discussions to work on an Ultimate Poker TV project. He misreportedly died. But as of now, Pollack is out of poker and may not be coming back.

Life Kind of Sorts Itself Out

At the end of the day, Epic actually ended up being a good thing for poker.

It provided employment to poker media when they needed it most. It got some people out of poker that maybe should’ve been out of poker. People like the GPI. 441 and HPT are doing better than ever.

So RIP, Epic. It all worked out for the best in the end. You got your yahyahs out, that’s for sure.

** Ok ok has never been known.