Home   Erica Schoenberg Appears On Next Episode Of 2M2MM 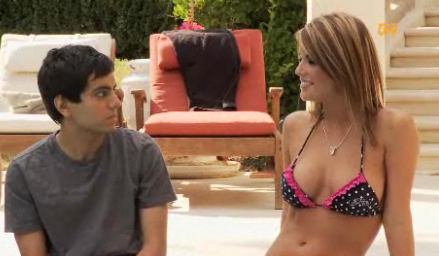 Howabout we play a little "Caption This" with the photo of Emil Patel and Miss July 2008 Laura Croft above. Post yours in the comments below.

Erica Schoenberg, the poker hottie we tend to drop more flattering superlatives on than a bad early 90’s R&B song, is guest starring in this week’s episode of “Two Months. Two Million,” the G4TV show starring those online poker players we mentioned in this post.

Here’s the set up for the episode according to G4TV:

Amidst the temptations of Vegas, the guys declare war on French poker legend David Benyamine, gunning for his money, his respect, and his girl. All New Episode Sunday 9PM ET.

Sure, they have a shot at swiping some money from Benyamine but there’s a fat chance at them winning over Erica. As in, if they’re fat they have a chance.

Get it? Benyamine’s freakin huge.

Anyway, we haven’t caught any of the past episodes of 2M2MM but word is the show’s well done. Hard to screw it up though when you throw in a few Playboy Playmates tit-bouncing around in bikinis.

Related, obligatory photos of G4TV’s Olivia Munn in a bikini below.