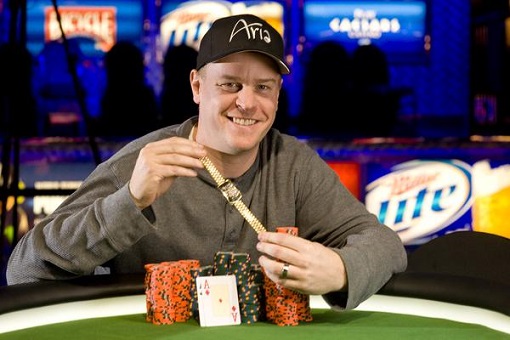 Amazing what a difference a year makes.

It’s been one fuckofa year for Erick Lindgren.

Easily one of the most liked and popular players within the industry, Erick fell on some hard times post Black Friday. From Haralabos Voulgaris bashing him on everything from Twitter to the B.S. Report, to the 2+2 threads…well, you’ve read or heard all about it.

Erick though has been on a run good tear since that BLUFF article. When he started playing again in February after gambling rehab, he has cashed in 12 events totaling over $1.3M. He narrowly missed a WPT Championship in May, finishing second to Chino Rheem.

Second place, dare we say, wasn’t in the cards last night for Erick?

Lindgren controlled the final table of 2013 WSOP Event #32 ($5,000 NLH Six-Handed), rarely having a hiccup along the way towards earning bracelet #2.

For the win, Erick banks $606,317. He defeated Lee Markholt-Watkinson ($374,960) heads-up for the win. Markholt-Watkinson came just short again of HIS ever-elusive first bracelet, although Lee Watkinson-Markholt does have 1 bracelet and an awesome black panther.