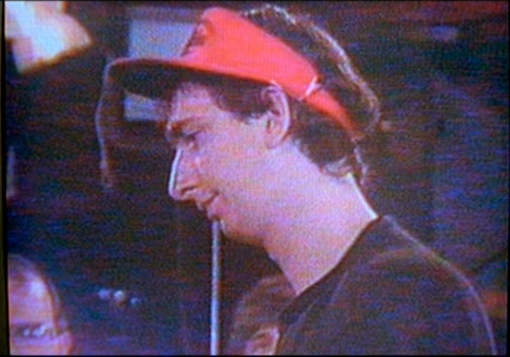 If you were wearing a crooked visor in 1988, then yeah, you probably have a good sense of humor.

Twitter is tough. Like, we’re funny as shit in blog format, but it took us awhile to find our tweeting legs.

One person not struggling to be funny on Twitter, however, is Erik Seidel.

Seidel could easily piece together a rapid-joke-firing stand-up routine from his tweets. Consider these gems:

Nothing like that feeling after an intense workout…so I’m told.
Obama got so much TV coverage this weekend, I thought he was dating a Kardashian.
Once the baby started to grow hair, the gig was up for John Edwards.
My wife thinks I’m lazy, she’s trying to get me out of bed. She doesn’t want to recognize the extra effort to reduce my carbon footprint.
Senate votes to allow guns to be transported on Amtrak trains. I’m betting this is going to improve on time performance.
Wow MacKenzie Phillips’ dad was so effed up, thought she was talking about Steve Zolotow for a minute.*

He’s like Jay Leno if Jay Leno was actually funny.

Also, for the record, we may have RawVegas.tv attend an open mic night and just do Seidel tweets for material, film it, and see how it goes. Erik, you get first shot at your material, but if you’re not down, we’ll have someone do it for you.

* Ok we made up that Zolotow joke. Still funny though. Kinda looks like him.