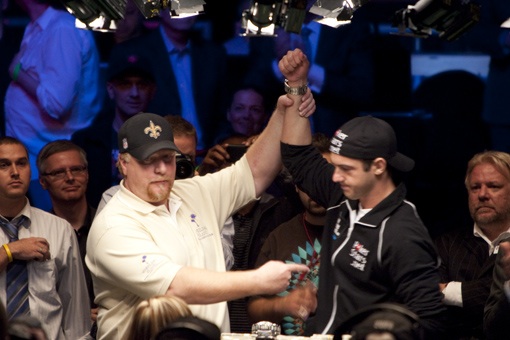 Who's the bigger winner tonight? Mikey!!!

The final table went about two hours longer than most of “us” figured. Darvin Moon, a ginger logger, played better than many thought he was capable. “Some” might even say he outplayed Joe Cada. But in the end, Cada prevailed, becoming the youngest WSOP Main Event champ in history. (Side note: the above photo kind of has a Steve Dannenmann/Salty Joe Hachem feel to it, doesn’t it?)

As we noted earlier, while the final table itself was excruciatingly long, there was a ton of drama on key hands and a great storyline of Joe Cada coming from 2.3M in chips to become the eventual winner. Should easily be the most compelling final table from a TV perspective in poker history.

A flood of news from the past couple of days, so in case you missed anything, follow the links:

:: Darvin Moon said at the press conference that he had a criminal past and then told us he was “just kidding.” But he does. And then there’s this too. Just when you thought you didn’t know a guy…
:: This former Playboy model said her mouth could only fit so much. Hee-hee!
:: Dani “Ansky” Stern joins the Brunson 10.
:: The final final table Inside Deal.
:: Jeffrey Pollack‘s final 2009 WSOP vlog.
:: Mike Sexton‘s Poker Hall of Fame induction ceremony.
:: AlCantHang tweeted: “Dennis Phillips pounced upon Darvin Moon when he left the cage.” Which reminded us of this.
:: More of The Maven.
:: Dr. Pauly‘s play-by-play of the final table action.
:: And finally, thank you to whoever gave us our all-time favorite Google search hit: is phil ivey black. Really? You need Google for that?