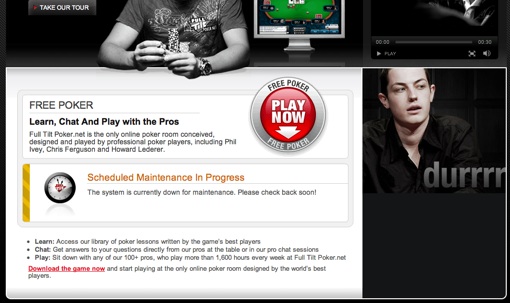 Well, this is more than just a little bit of maintenance...

We had heard the whispers for weeks, but didn’t think that the Alderney Gambling Control Commission (AGCC) had the teeth (or balls) to do it. But they did.

Full Tilt Poker is down. The AGCC has suspended its gaming license.

From the AGCC release:

The decision to suspend these licenses follows a special investigation prompted by the indictments unsealed by US Attorney General’s Office in the Southern District of New York on 15 April 2011, during which grounds were found to indicate that these licensees and their business associates were operating contrary to Alderney legislation. The nature of the findings necessitated the taking of immediate action in the public interest.

Read the release in full here.

Alderney licenses a number of major gaming sites, including PKR, Golden Palace, and Paddy Power. Over the past few weeks, those partner sites (though not necessarily the ones we just listed) had been applying pressure on the AGCC to suspend Tilt’s license, especially as the state of the company’s books and financial shortfall in U.S. player funds became widely known within European industry circles.

The biggest question now is: do the AGCC’s actions completely torpedo Tilt’s chances on raising the capital they seek in order to pay back U.S. players and continue operations? Or does this finally force Tilt management’s hand (i.e. Ray Bitar and Howard Lederer) to finally accept one of the more-than-reasonable deals (i.e. Phil Ivey’s White KnightTM, among others) to sell the Tilt asset (which is, specifically, the platform and the players) so U.S. players can get paid back while Eureopean operations can reasonably continue. Although, the price of that asset is considerably lower than it was just weeks ago based on the AGCC shut down.

Just how bad is it for Tilt? The AGCC isn’t even offering a chance for Tilt to appeal this decision. Tilt and the AGCC won’t meet until July 26th. So Tilt is potentially completely shut down until then, barring some unexpected/unlikely development. And, as noted in the above paragraph, Tilt’s value has just effectively been given The Sisters vs Andy Dufresne treatment. So potential deals like the Jack Binion one (overblown, not likely to have happened) or the Phil Ivey White Knight one (which Bitar and Lederer so egregiously rejected it caused Ivey to sue the company) are, if not kaput, worth a lot less money and a lot more equity to the potential buyer than just a few weeks ago. 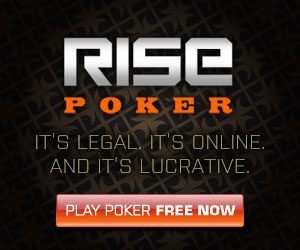