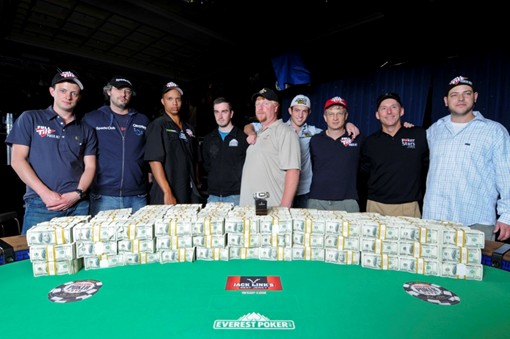 You'd think a bunch of dudes who just became millionaires could at least crack a freaking smile.

The 2009 WSOP Main Event has played down to the November NineTM, which means it’s time for our second annual (sort of) Good for PokerTM, Bad for PokerTM, Meh for PokerTM list.

First things first, had Phil Ivey not N9’d it, this would be a turd of a final table on par with 2007. Probably even worse. Just like Cush would’ve saved all for Jerry, Ivey saved all for this final table from a marketing and general mass public interest perspective.

Anyway, we polled a number of people in the so-called “media,” industry types, and pros to gather opinions to go along with our own. Below is the general consensus. Note that just because someone might be listed as Bad for Poker, that doesn’t mean he is a bad dude (except maybe for Shulman). It just means they won’t do much to promote the sport and help the game grow, among other things.

For a more detailed “analysis” of this list, check out our column in next month’s edition of Bluff Magazine.