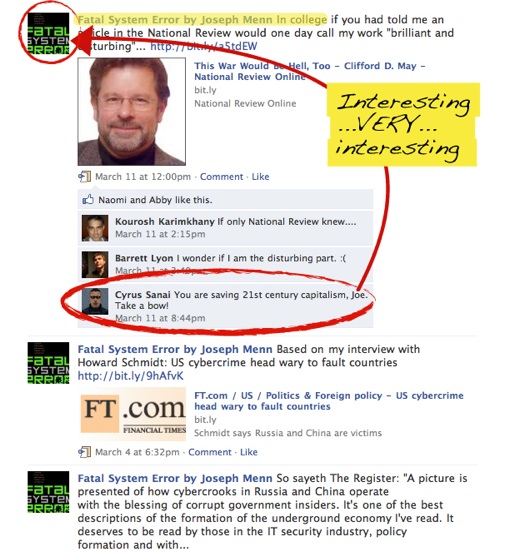 More and more chatter has been going on within the industry regarding the legitimacy of Joseph Menn‘s Financial Times article stating grand jury indictments may be coming down soon on people at Full Tilt.

A couple of weeks ago, Poker News Daily noted the following regarding the allegedly-coming-soon-indictments:

[Cyrus] Sanai told Poker News Daily why Menn broke the grand jury story: “He’s the only one who is actually looking. It’s a ‘B’ story in the grand scheme of things. Joe has been writing about online gambling and his beat is cyber crime. No one else was really paying attention. No one has been assigned by an editor to do an original report.”

On April 6th, one day following the Financial Times article, Sanai filed a response in the bot case in the U.S. District Court for the Central District of California. He explained, “Defendants desire to seal [Sanai’s] ex parte motion for a continuance and early discovery. The grounds are that Plaintiffs’ motion discusses a grand jury investigating the Defendants. However, virtually simultaneously, the Financial Times ran an article disclosing the same information.”

According to Sanai, Full Tilt’s lawyers purportedly wanted to seal Sanai’s motion because it discussed the newly discovered grand jury investigation: “The grounds for a motion to seal are not only not met, the request is entirely frivolous and made in bad faith.” Sanai noted that the “the news [of the possible grand jury investigation] has spread like wildfire through the poker community” and even quotes a Poker News Daily story on the issue. However, the court denied the motion to seal.

While 1/3 of the Entities is an ex-lawyer, we’re no legal experts and have no idea if anything is about to pop. But for the most part, the Feds have been fairly consistent in going after payment processors as opposed to site operators.

Regardless, it’s pretty interesting (and thanks for pointing out in our comments section) that Cyrus Sanai, aka the lawyer representing Lary Kennedy (read about the bot suit here, and more about the awesomely-dastardly-named lawyer’s shenanigans here), is Facebook friends with Menn, and based on his comments, the two seem pretty chummy. Gee wonder who the source is for the FT.com stories?