Home   How To Fix the WSOP Ratings Problem 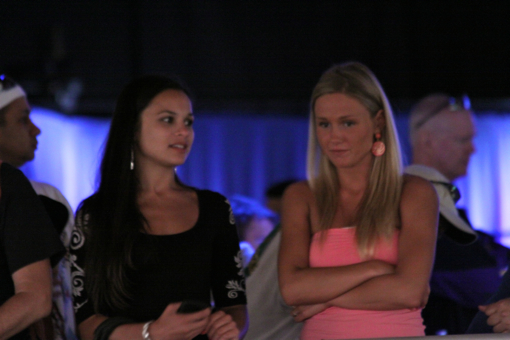 Let's just say it's going to take more than a couple of pretty faces to turn the WSOP ratings arrow north again.

There’s been a lot of discussion recently [started by us] about what the WSOP / ESPN can do to bump its stagnate at best–declining at worst– ratings.

We spoke to Ty Stewart on our last podcast (listen here) and on This Week in Poker (watch here) on the topic. And we created the #wsopneedsto twitter discussion for your suggestions (of which there were plenty of good ones).

Based on conversations we’ve had amongst ourselves, with “industry types,” and from your suggestions, we’ve compiled a few ideas to get WSOP ratings back up and reach the mass audience while getting the current audience more invested.

While these aren’t all of the ideas we have / where presented, it’s a good starting point. Plenty more below the fold.

1. Stop cutting costs, which means cut the Main Event. The vast majority of WSOP coverage on ESPN is now dedicated to the Main Event. Makes sense to a degree: it spans two weeks where most tourneys last 3-4 days. It also cuts production costs. By dedicating the bulk of programming hours to one event as opposed to spreading it out over the entire 6 weeks of the WSOP, while we’re no math majors, we do realize this saves money.

However, the drawback to this is there are now 32! episodes of the Main Event, and quantity is trumping quality.

441 Productions (the production company responsible for the WSOP since ’03) has one of the most difficult jobs in all of poker. Producing a coherent Main Event story that starts with over 7,000 entrants requires a level of detail and precision that can’t be understated. However, the broadcasts have evolved into countless stories about people we’ll never see again on the show (except maybe with a fleeting elimination) and other distractions that are clearly not translating into ratings. By cutting the episodes, you can eliminate inconsequential stories/storylines, focus more on the November Niners and other worthwhile pros who ran deep.

For example, this year barely any attention was paid to Adam “Roothlus” Levy (12th) and The Intense Stare of Scott Clements (18th), two of the more well-respected, most consistent players on the circuit. For all of the complaints from some about how poker has no new stars post-03, well, right there is part of the reason why. Guys like these are stars of tomorrow (and really, today) but you’d never know it from the WSOP coverage. Instead, the focus is on the fleeting. We’re pretty sure that a Roothlus or Scott Clements has better odds of making another deep Main Event run in the coming years than, say, Soi Nguyen.

Or somewhat relatedly, break out of the structured format of the broadcast when appropriate so storylines get their just due. For example, when Matt Affleck (who ESPN gave a ton of time to this year) busted from the Main Event, what we witnessed in person was one of the more captivating human interest moments of our seven-year WSOP history. However, with the amount of editing done to the moment, and inability to just keep the camera focused on Affleck (and Norman keeping his mouth closed–sometimes silence says more than words), the gravity of the situation was completely lost during the broadcast.

Bottomline: If you had a shorter WSOP episodic run that focused on more of the big moments, typically that’s going to lead to a bigger pay-off in the ratings.

2. Where does the rest of the programming hours go then? The $50k Players Championship is a slam dunk to cover. As is the Main Event. We’re pretty sure Ty Stewart and crew will continue some form of fan voting/all-star tournament, as it guarantees name pros on TV. As suggested by a few Tweeters on our #wsopneedsto, remaining programming should then go to a flexible schedule of final tables, where the big names/big stories of the year get the screen time they deserve. If Phil Hellmuth (the biggest ratings needle mover in the game) makes a final table and goes for bracelet #12, well, that makes it to the broadcasting schedule. If someone is pwning the WSOP and dominating the Player of the Year race, he might actually get some face time.

Think about 2006. 21 year-old Jeff Madsen wins two bracelets (including one in an epic heads-up battle against Erick Lindgren) and Player of the Year honors with one of the more impressive WSOP showings in recent memory. Should’ve been a huge star. But none of his wins made it to broadcast. Ball dropped.

Now what if the WSOP just doesn’t have compelling final tables and you’re short on hours before the Main Event begins? Easy, you film more Main Event. Always have that as a fallback.

3. Ditch Lon McEachern and Norman Chad. When the WSOP first started airing its modern iteration on ESPN in 2003, Lon and Norman were just fine. The fields weren’t dominated by 23 year-old online phenoms (look at the old final tables, filled with old white dudes and homeless Elix Powers). So Norman and Lon fit the demo and where the game was back then. However, the game is much younger now. It requires more edge to grab the appropriate demo’s attention. And Lon and Norman are as edgy as a circle.

Their routine is basically same old, same old (and is now duplicated and given more screen time during NAPT broadcasts). Time for some new faces and voices.

Fortunately, the formula to make this a hit isn’t too difficult. You get a hot girl for features/exit interviews. Then follow the ESPN3 live stream model by bringing in an established pro who can talk strategy and a new “color” personality who has something to say other than how hot Patrik Antonius is or how many times he’s been married.

Again, this is not hard.

4. Bring back the fun… Poker is a game filled with degenerates. Time to embrace it, not sanitize it. It works for other “fringe” sports. Plus, after 7 years in the industry, we’ve come to learn that the poker players themselves, with a few exceptions (see: Hellmuth, Phil and Negreanu, Daniel), just don’t care about marketing beyond the poker audience. It’s -EV to them for whatever reasons. This means that more effort will need to be made on the production end to create situations and segments that highlight player personalities and make them more marketable. The Nuts segments back in the day did this well (remember Bill Gazes getting hit with the football?) but it seems like they ran out of ideas for these a loooong time ago.

But if Survivor can keep figuring out new challenges after 20 seasons, the WSOP broadcasts can probably come up with some interesting personality packages as well.

5. …but don’t ignore the strategy. Some of this would point be accomplished with a better announcing duo (i.e. a pro who handles that specific aspect), but one thing we’ve learned in poker is that the mainstreamers and hardcore fans alike really enjoy good, thought-provoking strategy. Currently, we get none of that in the featured table commentary. And the online poker site sponsored strategy packages (this year, from Tilt) usually aren’t anything overly interesting/memorable.

Get some of the new, younger thinkers from PokerVT, CardRunners, or one of the other 457 online training sites to dissect critical hands from years past or present.

6. Promote the the damn thing. This one almost squarely falls on ESPN’s shoulders. Now when the November Nine was first announced, the poker media was sold on the concept that ESPN would be doing a special feature on the final table-ists as well as other promotional efforts. But for a company willing to take $20M in advertising from PokerStars for a year and dedicate fortyseven billionty hours of programming hours to the WSOP, ESPN sure doesn’t treat the World Series like a premier property.

Poker accomplishments at the WSOP never make SportsCenter except on the rarest of rare occasions. Even worse, WSOP stories rarely get real estate on espn.com. Only when Phil Ivey made the ’09 final table did ESPN step up, following him on E:60 and with a magazine feature. But Phil Ivey can only make the final table every other year or so, so time to get the internal marketing engine humming a little more at the Global Sports Leader.

7. Delay heads-up and make it live. We’re going to work on the assumption that the WSOP/ESPN is going to keep the November Nine concept for now. If so, we’d suggest delaying heads-up and then airing it as a live event. Spend a few days to a week following the final two 24/7 style, build interest around them, and broadcast a live heads-up  (non-hole-card cam) event where one of these two individuals we’ve just learned so much about from the aforementioned 24/7 style series wins around $10M. That’s compelling television.

On that note, it’s time to decide if poker will be treated as a sport, or more like a reality show. If it’s a sport, then you build around your marketable stars while trying to create new ones. If it’s a reality / game show, then you promote the hell out of the fact that someone wins $8-10M each year in your “competition.” It’s a subtle shift, but a strategy that could pay dividends if executed properly.

Like we said, that’s not all of the ideas, but it’s a starting point for discussions. While the WSOP is clearly and unquestionably the biggest brand in tournament poker, it is at a crucial point now where something needs to be done to ensure it stays that way.

Finally, here’s some of our favorite suggestions from the #wsopneedsto twitter discussion.

:: @ djslybri: #WSOPneedsto show more preliminary events and be prepared to film one if name player(s) make a final table, and shorten the wait for FT

:: @change100: Get rid of the 1-hr rule for “non-exclusive” media. Figure out crowd control issues inside ropes another way.

:: @BJNemeth The #wsopneedsto move back to the spring,so episodes air on ESPN during the summer.The Nov 9 should be the Sep 9(9/9)

:: @WindBreak247: #WSOPneedsto Focus on the same stories that poker media hilight throughout WSOP. Usually they’re ESPN afterthoughts, if mentioned at all.

:: @compncards: #WSOPneedsto Hire a PR firm to do a better job of promoting the players and the event.

:: @JoshSlagter: If NASCAR can keep views for 4+ hours , WSOP can find a way to fill 15 hours on a cable station. I’d be hooked w/hole cards.

:: @HerschbeinCPA: @wickedchops #WSOPneedsto re-think the “November Nine” was supposed to build hype & ad $’s, all it is now is a chance for ESPN to catch up.

:: @trishalynn: #WSOPneedsto hire their own producers because a well-paid, dedicated in-house team could have a finished show up the next day

:: @opurt11: #WSOPneedsto Stop showing the same scenes. Cash being brought out of a vault? Lame. Show the players being intro’d w/their song instead.