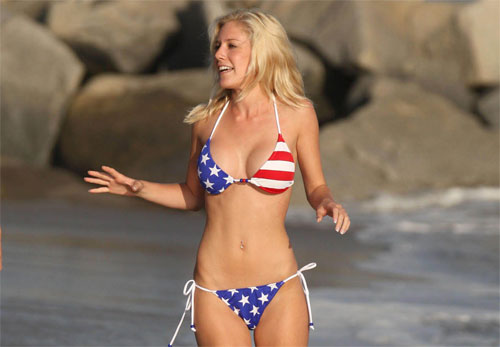 Heidi Montag celebrates the passing of HR 2267 in the House Finance Committee by hitting the beach in a US American bikini.

According to the PPA, the bill establishes the licensing and regulatory framework for the U.S. to exercise control and oversight over Internet poker and other forms of Internet gaming.

The bill still has a long way to go before it reaches Obama’s desk but this is definitely a big step forward in cleaning up the UIGEA mess that Bill Frist and his cronies Pearl Harbor’d into law back in 2006 as well as towards the regulation of online poker in the U.S.

The omnisciently omnipresent Kevmath, who was all over the markup hearing today on Twitter and the 2+2 forum, sums up what’s next:

The bill gets reported from the Committee to the House floor. The next bill regarding Internet gambling is HR 2268, currently in the House Ways and Means Committee. It’s unknown if there will be another hearing on that bill or if/when markup will take place.

If Frank’s bill gets by the House, it will then be sent on to the Senate.

UPDATE: Official satement from the PPA praising the passage of H.R. 2267 and highlighting key provisions here.