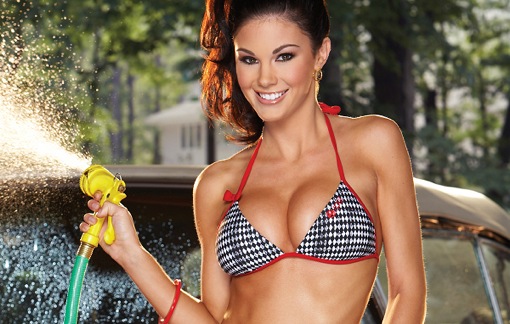 Some lucky contestant will be getting a cakewalk into Round 2 of the Million Dollar Challenge...just sayin'.

In what could end up being a big “Eff you” to Full Tilt if successful (big “if” for now…), FOX Sports is launching the PokerStars Million Dollar Challenge on October 11th.

The basic concept: qualifiers have to win two rounds of heads-up play. In the first round, contestants will face off against celebs like 2008 Playboy Playmate of the Year Jayde Nicole (above), Jerome Bettis, and former UFC champ/Jenna Jameson impregnator Tito Ortiz. In the second round, they have to beat the likes of a Chris Moneymaker, Duke grad Vanessa Rousso (who went to Duke), or Barry Greenstein. If they do that, they take on Daniel Negreanu for a shot at $1,000,000.

To get on the show, you have to win online qualifiers at PokerStars, then submit a 60-second video for a chance to get on it. So please, whatever you do, have more personality than that first guy who was on Face the Ace. Or Darvin Moon. Holy crap. If you missed Inside Deal with the November NineTM chip leader, go here.

For some NSFW of Jayde Nicole, here.