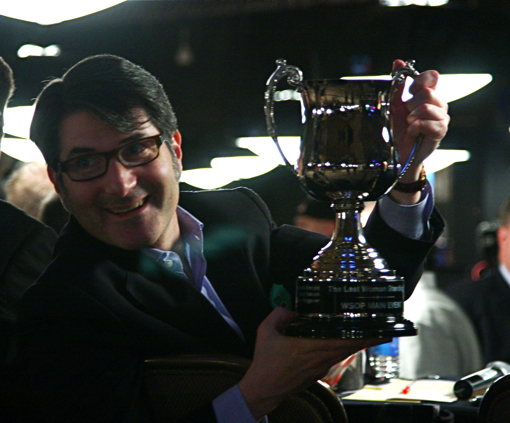 Jeffrey Pollack oversaw tremendous growth with the WSOP since he took over as commissioner in 2006.

Harrah’s announced today that Jeffrey Pollack is “leaving [his] post” as WSOP commissioner.

Prior to serving as WSOP commish, Pollack was Vice President of Marketing & Corporate Communications for the NBA and Managing Director of Broadcasting and New Media for NASCAR Digital Entertainment. He was hired by Harrah’s in 2005 as a VP of Marketing and was elevated to President and Commissioner of the WSOP in 2006.

Under Pollack’s guidance, WSOP attendance has grown 88%. He’s also overseen the launch of the WSOP Europe, Poker Hall of Fame induction ceremony, $50,000 H.O.R.S.E. championship, Ante Up for Africa charity event, and of course, the November NineTM.

Of course, Pollack was also a vlogging, blogging, twittering fiend who was always looking for new technological innovations to reach the poker audience.

Go below the fold for more detailed information on growth during Pollack’s tenure. Go to Pokerati here for other additional info.

We expect to do an exit vlog with Pollack later today. Check back this afternoon.

With registration for this year’s Main Event, the World Series of Poker crossed the $1,000,000,000 threshold in total prize money awarded to players. During its 40-year history, the WSOP has paid out $1,041,266,592. More than $600,000,000 has been paid out just in the last four years alone with Pollack as commish. Here is the historical prize pool information for the World Series of Poker.