Home   Jerry Buss Dates Young Girls and This Is Bad How? 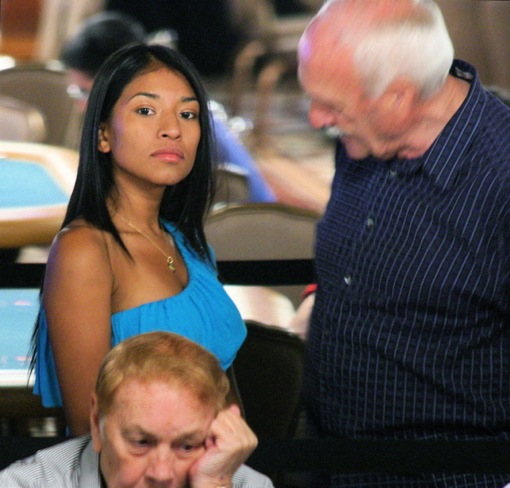 Young girls love Jerry Buss because he's funny, is in a band, and excels at extreme sports. Or it's because of his money.

As for those teen-aged girls, Buss has long dated hundreds of them, usually only once or twice each, and then collected their photos in albums. He has not been above boasting about his conquests to some media and associates.

Buss and his elderly friends gather in his owner’s box at Lakers games with their young dates, a sight that’s increasingly hard for Jeanie Buss, the owner’s daughter and Phil Jackson’s girlfriend, to stomach.

Now we’ve seen Buss at plenty of poker events over the years with young girls (see at 1:20 in here and here). But really, if you’re 75 and nearing the end of the line yet can still pull 19 year-olds, more power to you. People should be building monuments in your honor (or better yet, statues with erections like they did in Ancient Rome with Priapus and Mutunus Tutunus).

Anyway, not sure why Jackson and Jeanie have their panties up in a wad here. Hot girls are hot. It’s like we always say…marriages are temporary, but hot 19 year-olds last forever.