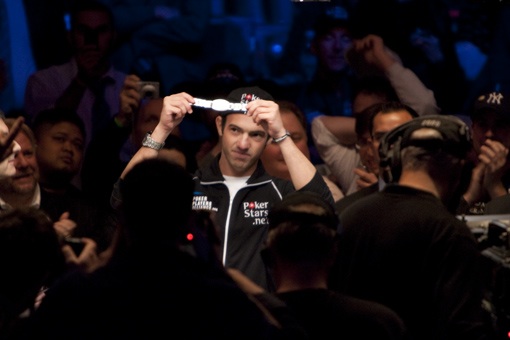 Joe Cada became the youngest ever winner of the WSOP Main Event.

The 21 year-old Cada banks $8.5M for the win (although really after paying off his backers, Johnny Bax and Sheets, then paying off the Fed, it’s closer to 2.5Mish, but whatever). Cada is now the youngest ever WSOP Main Event winner, beating Peter Eastgate‘s record from last year.

Cada defeated Darvin Moon, a ginger logger, for the title.

Watch ESPN on Tuesday night to see how it all played out. Should make for great TV.

Because it’s already gotten buried on the site, below is the press conference from earlier today with Cada and Moon. According to the video, looks like Cada is about to hit the Palms and party up with the Maloofs. Have to say, we liked his answer on being an ambassador for the game and we hope he follows through.