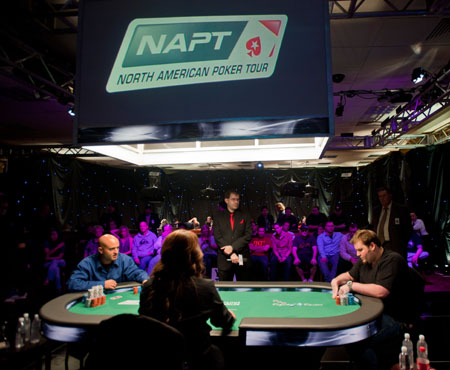 Joe Tehan, whose name still looks too much like Tehran for our liking, outlasted a field of 701! to capture the 2010 NAPT Los Angeles.

For the win, Tehan banks $750,000, bringing his career earnings to just a hair shy of $3M. And to clear some confusion as it’s been the primary focus of media attention around Tehan’s victory, the win does not constitute poker’s elusive Double TroubleTM. Tehan captured his World Poker Tour championship in 2006 (at the Mandalay Bay Poker Championship), and to qualify for a Double Trouble, the WPT and NAPT win must be in the same year. Still, it’s an impressive feat Double Trouble or no Double Trouble.

The man many considered the favorite going into the final table, Jason Mercier, missed out on his Quadruple DiademTM by flaming out in seventh ($84,857) when his A-K lost a race to Tehan’s J-J. Michael Binger finished sixth ($114,000).

* Photo courtesy of the PokerStars blog.