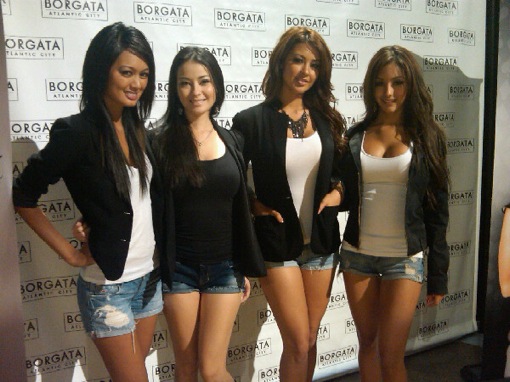 The Royal Flush Girls probably couldn't believe the fight that almost broke out at the Borgata during Day 2 play.

In what is one of the stranger tournament stories we’ve heard in awhile (albeit not Vinnie Vinh chair or Eskimo Clark seizure strange), Jeremy Schwartz and some random railbird got in an intense screaming match at the WPT Borgata Poker Open.

How did this happen? Copy+paste from the always excellent WPT tournament reporting site:

With the final board showing 8

and about 22,000 already in the pot, Steve Buckner checked the small blind, Larry Wolf bet from middle position, and Buckner check-raised all in for 86,100. Wolf called with 8

for a set of eights, but Buckner showed 6

to win the pot with an eight-high straight. Buckner, who had lost a pot earlier with A-J against Wolf’s K-K, apparently held a grudge, because he begins celebrating loudly by skipping up and down the aisle. Wolf isn’t pleased with Buckner’s antics, and says a few things like, “You don’t have to act like a jerk. Just take the pot.”

…Technically, that ended the hand, and the dealer begins shuffling to deal the next one. But the media and the crowd is still gathered around the table as Buckner continues to brag about the hand. Wolf tries to get everyone to just move on and continue the tournament. When somebody calls out Wolf for calling Buckner a jerk, Wolf says, “I didn’t call him a jerk. I asked him to not be one.”

But then Wolf says that Buckner was being a jerk…a woman near the table takes exception with this. (She isn’t a player, but clearly a railbird who came inside the rail to see what happened.) She says, “He is not a jerk! He is not a jerk! I know this man, and he is a kind man. You don’t know him! He is not a jerk!”

Wolf looks at the woman and says, “Who are you? You’re not involved in this. You’re not even supposed to be here.” Wolf argues with the woman for about 10-15 seconds, and then she asks, “Are you Jewish?”

…Jeremy Schwartz (same table in seat 2) takes huge offense to that line, and he instantly springs up out of his chair to yell at the woman. “Whoa! What the hell was that about?” Schwartz is a big guy, and he rips off his sunglasses, pulls back his hood, and towers over this woman, who doesn’t back down.

Schwartz demands to know why she would ask that question, and what in the world being Jewish has to do with any of this…Borgata Tournament Director Tab Duchateau runs over at this point, and he quickly gains control of the situation. He gets Schwartz and the woman to back down a bit, and tells Wolf to calm down so he can handle things.

Get full chip counts here. Read about the crazy Are You Jewish? almost-fight here.

And for those keeping track at home, 2010 WSOP Event #3 is down to a final table lacking in the luster department. Get chip counts for that one here.