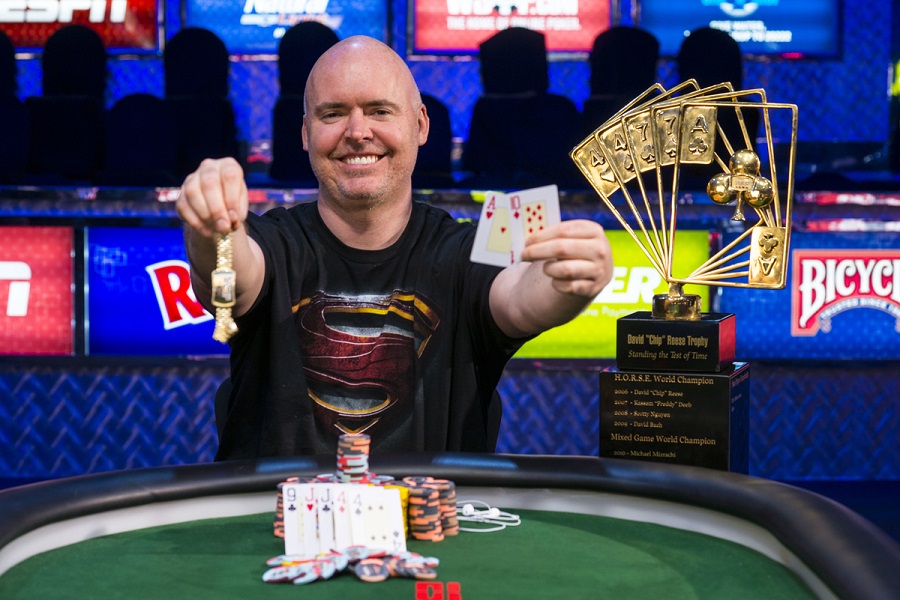 On top of the world.

While only 43, John Hennigan would be considered an old school Vegas hustler.

He’s like the indirect lineage of the Puggys, Roberts, and Doyles. Dabbles in all forms of gambling debauchery.

Hennigan has had a helluva run at the Players Championship the past few years. He cashed two years ago. Last year, he final tabled, finishing 3rd. Hennigan completely the climb on Thursday, breaking through and winning the 2014 WSOP Players Championship.

The win is Hennigan’s third WSOP bracelet. He banked $1,517,767, pushing his career live tournament earnings to over $6.2M. Hennigan defeated the on-a-heater Brandon Shack-Harris ($937,975) heads-up for the title.

In other WSOP news…

:: Event #15 ($1,500 8-Game Mix) – Call this the premier event of the day. With 14 remaining, Phil Ivey (3rd overall) and Daniel Negreanu (9th overall) are in the hunt for bracelets. They trail overall chip leader Dan Heimiller. Get full chip counts here.

Finally, Event #51 ($1,500 NLH Monster Stack) started and pulled a combined Flight A+B field of 7,734 registrations. First place will earn $1,327,083. Other massive turn-out for the more branded, gimmicky (we mean that in the best possible way) event. Lots of play to go, but get some updates here.