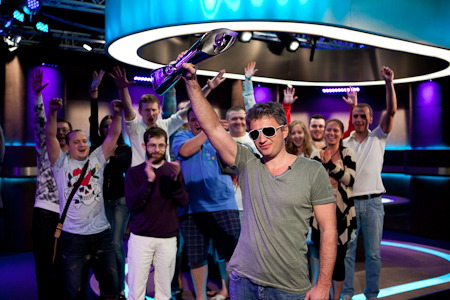 Leonid Bilokur became the fourth $1M winner at the 2012 PCA.

We’re all about giving credit where it’s due.

It’s possible that over the years, we’ve had some fun at the expense of Jonathan Duhamel. But not without reason: 1) the first impression anyone had of him was the brutal bad beat he inflicted on fan-favorite Matt Affleck at the 2010 WSOP and most viewed him generally as a major luckbox before the final table; 2) he was basically the only person to ever bail on an appearance for This Week in Poker; and 3) the whole French-Canadian thing.

But we’re also always willing to admit when we’re wrong about something. Like, for example, we were really, really wrong about thinking The Killing was a good show. Or that the man Duhamel defeated heads-up at the 2010 WSOP would’ve been “good for poker” (a-hem) and that Duhamel would not.

Turns out, Duhamel has been a very worthy WSOP champ and generally good for the game.

After a relatively solid 2011 which saw him win an EPT event and semi-final the NBC National Heads-Up, Duhamel has started this year on an absolute tear, final table-ing four PCA events and earning over $1M in the process.

Get a full final table recap and results here.