Home   Look Who Is Advertising on ESPN.com 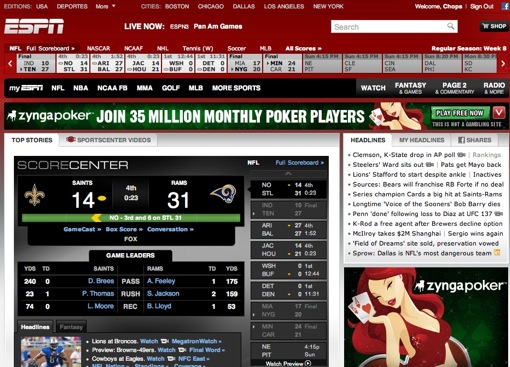 An ad buy on NFL Sunday? Zynga Poker is getting serious.

Is the 800lb gorialla that is Zynga Poker awaking?

Zynga Poker, the world’s largest online room with over 29M monthly users (and 8M daily), is now advertising on espn.com.

For a company that barely focuses on pushing its poker product (it’s like the red-headed step-child internally at the company compared to the ‘Ville products), the advertising could signify a major shift.

Post-Black Friday, most industry insiders pegged Zynga as a potential “winner,” including us. But the platform itself wasn’t anywhere near what PokerStars and Full Tilt customers were used to experiencing (however, worth noting, it’s come a long way over the past six months).

We don’t expect Zynga to make any earth-shaking moves into poker until after they IPO. But an ad buy on espn.com–even if they don’t come near the $20M+ PokerStars is rumored to have dropped annually with The Globals Sports Leader, shows there is at least some appetite on their part to broaden the profile of their product and explore new customer acquisition channels.