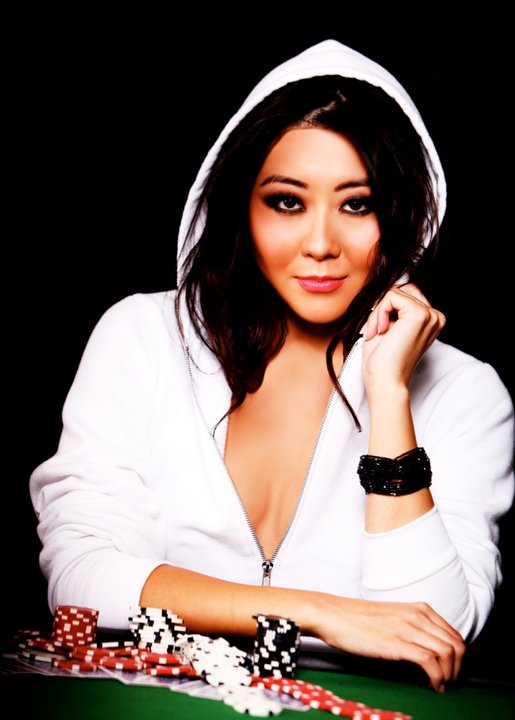 Hot poker playing girls have always been a commodity to online poker sites. Especially when they’re good. And it doesn’t hurt if they can sing like a delicate siren and speak Mandarin as well.

So it shouldn’t come as much of a shocker that Maria Ho, a woman, finally got an endorsement deal, as sources tell us that UB will announce her signing sometime later today.

Like the signing of Joe Sebok a little more than a year ago, this is a solid move for UB, which is still facing fallout from the UltimateBet super-user scandal. Fortunately for Maria, she won’t be as much of a public punching bag either. Ho is one of the more respected, well-liked female poker players on the tournament circuit and has had a great past few months, including but certainly not limited to a final table appearance at WSOP-C South Africa, a 10th place finish at WPT Bellagio Cup VI and a 11th place finish in the 2010 WSOP $10k Limit Hold’em World Championship this summer.

With the signing of Ho, and the semi-recent inking of Adam “Roothlus” Levy, Eric Baldwin, and Brandon Cantu, it certainly looks like UB is moving towards a younger core of players. Now if they can only explain who the hell this guy and this guy are (creepy team UB uncles?), they might just have a coherent marketing strategy for once.

With a history of solid performances at a number of major land-based events, including a World Poker Tour (“WPT”) final table and World Series of Poker (“WSOP”) Circuit final table within the last three months, Ho is well deserving of her place on Team UB, the home of 11-time WSOP bracelet winner Phil Hellmuth, acclaimed poker authority Joe Sebok and a number of other top players.

At the 2007 WSOP Main Event, Ho was the Last Woman Standing out of 6,358 players, finishing in 38th place for $237,865.  Ho has nine WSOP career cashes and three cashes on the WPT, and she has established an impressive reputation as a successful high stakes cash game player in Los Angeles and Las Vegas, making her one of the few and youngest female players competing with poker’s elite in the biggest games.

Away from the tables, Ho’s charisma and poker expertise lent themselves well to her 2009 role as host and on-camera personality for WSOP.com, picking up regular commentator and contributor spots on ESPN360’s poker broadcasts.  Ho has helped raise poker’s profile in the mainstream media with appearances on such distinguished shows as CNN’s Anderson Cooper 360, and  she is internationally recognized from her appearances on the seven-time Emmy Award winning show The Amazing Race on CBS, and the widely popular American Idol on Fox.  Her success, both on these top shows and at the poker tables, naturally caught the attention of a number of online poker sites that were interested in bringing her on board.

“I am honored to be joining the ranks of top UB pros such as Phil Hellmuth and Annie Duke.  With the new direction and vision I know UB has for their future, this is an extremely exciting time to become a part of such an amazing team,” stated Maria Ho.

The 27 year-old pro was born in Taipei, Taiwan and moved to Los Angeles with her family when she was four years old.  She graduated from the University of California, San Diego in 2005 with a degree in Communications and a minor in Law and Society.  Ho maintains a dual citizenship and is fluent in Mandarin Chinese.  She will be blogging, writing articles and posting videos in both English and Mandarin Chinese at UB.com so she can reach out to online players in both languages.

Maria Ho kicks off her UB.com representation at the NAPT in Los Angeles beginning Friday, November 12, 2010. Online poker players at UB.com can employ the online poker site’s free UltimateBuddy feature to discover where Maria Ho is seated and join her at the tables.

Raise. Stack. Own. Built for the passionate poker player, UB.com offers top poker rewards, optimal tournament structures and fast-paced action games in one of the largest online poker communities in the world. Players can download the free poker software, play in free ring games and tournaments, plus meet and chat online with Phil Hellmuth and other Team UB pros to learn and enhance their playing strategy. UB provides the best poker games available on the net as part of the CEREUS poker network.