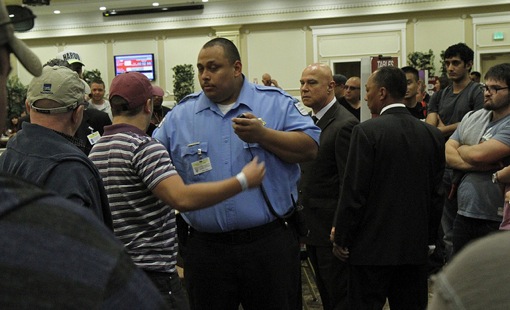 You want a piece of me?! And my bodyguard!

Two of poker’s genuine good guys–Matt Marafioti and Jon Aguiar–almost sort of got in a fist-a-cuffs at the 2012 WPT Legends of Poker on Friday.

Marafioti, who like Jamie Gold at the 2006 Main Event for some reason showed up with a bodyguard, exchanged words with Aguiar. This escalated into a more “words.”

Marafioti was escorted out of the tournament area, but was allowed to return. Aguiar was eliminated not long after the “altercation.” Marafioti, who is on a nearly unprecedented roll of ambassadorship never seen before in poker, survived the day stacked at 54,000.

In related news, the WPT Legends of Poker kicked off Friday. Michael Lipman ended Day 1A as the chip leader with 257,100. He’s followed by Vadim Bulavchik with 242,200.