Home   Matt Savage on WSOP Europe Bracelets: Not Like A Real Bracelet 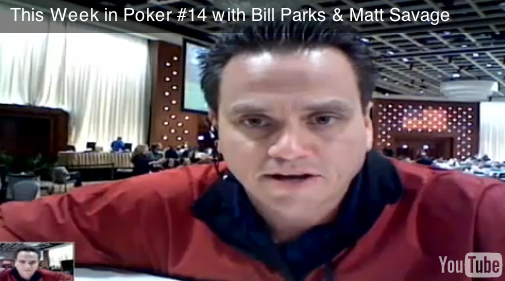 Matt Savage joined us on This Week In Poker live from the WPT Borgata last Tuesday.

We never ever pick favorites. Never. Ever.

With that said, our interview with Matt Savage last Tuesday on This Week In Poker was our favorite so far. Lots of solid topics covered, and great questions submitted from our viewers, including one from Jay “WhoJedi” Newnum on whether WSOP bracelets should be awarded outside of Vegas.

Savage continued, “World Series of Poker was founded in Las Vegas. That’s kinda what it’s about.”

Listen to his full response here and tell us what you think about bracelets awarded outside of Las Vegas in the comments below.

:: Whether Allen “Chainsaw” Kessler has ever suggested something he has agreed with [watch]

:: The rumor about the Rio being sold and where the WSOP may be moving to next [watch]

:: Favorite change with the new season of the WPT [watch]

You can watch the full episode with Savage, Bill Parks, Michele Lewis and Jess Welman by clicking the video below.