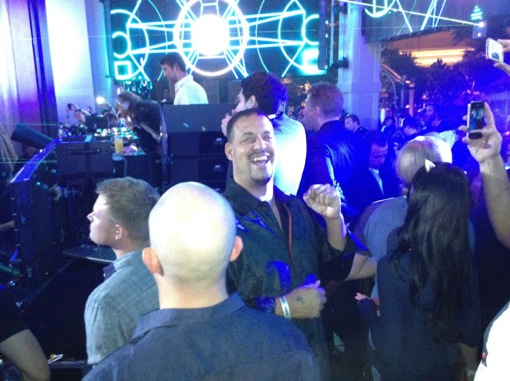 According to TMZ, poker player/part-time swimmer Michael Phelps scored about $100k playing some high-stakes poker in Las Vegas this weekend.

Some confusion around the story as the pics they used were actually taken in Atlantic City last year. But Phelps was in Vegas this weekend, hanging with Phil Hellmuth, Jean-Robert Bellande, and others.

Good to see Phelps still degen’ing it up.

After the score, Phelps hung at Surrender at Wynn with the aforementioned Hellmuth & JRB and others.

So Phelps is out publicly playing poker again. The bigger question though is this: with Phelps (presumably) no longer competing as an Olympic athlete (on the side, when not playing poker), is he open to a site sponsorship?

Rafael Nadal certainly opened the door for the high-profile-athlete-signing-with-a-poker-company door when he inked his PokerStars deal.

However, not out of the question would be a respected Nevada brick & mortar looking to attract a mainstream customer base. Given all of the activity with Fertitta Interactive lately–and their association to world-class athletes via the UFC–a sponsorship there could make sense.

Or, with their expansive TV reach via the WSOP brand, Caesars Interactive would make a lot of sense as well.

Regardless, Phelps getting some poker pub, coupled with the recent Federal ruling that poker is a game of skill, certainly goes a long way to further legitimizing the game to mainstream America.