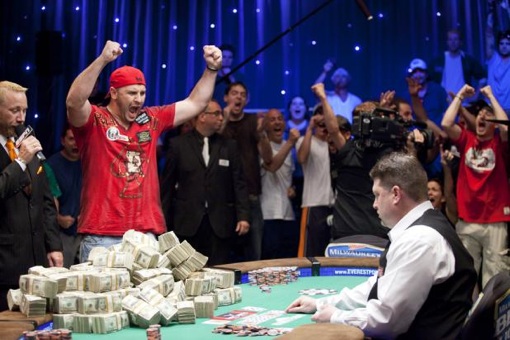 The look of pure and utter relief.

Just look at what you can do if you really need to focus.

Earlier in the year, during the last week of his Bodog deal, David Williams buckled down and won the WPT Championship. While he didn’t necessarily need to win that tourney to secure another high profile deal, it certainly didn’t hurt.

Now, about a week after reports surfaced of some big-time IRS issues, Michael “The Grinder” Mizrachi pulls a Helio Castroneves, coming through big-time, winning WSOP Event #2 ($50,000 Player’s Championship), and banking $1,559,046. Now, after he pays his backer half and whatever “make good,” there’s less than half of that remaining. Then Obama gets his cut. Then he pays back the IRS what he already owes. So at the end of the day, he might not see more than a few pennies from the win, but still, it doesn’t effin’ hurt and good for him.

Grinder was also considered by some to be one of the “best without a bracelet,” a distinction he’ll shed now.

* Above pic from the WSOP site, check out more great WSOP pics here.